On 12 January 2013, Alstom Transport presented the first of the 19 Citadis trams for the T7 line… 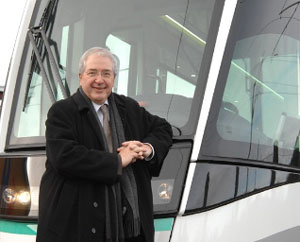 On 12 January 2013, Alstom Transport presented the first of the 19 Citadis trams for the T7 line to Jean-Paul Huchon, Chairman of STIF, the body responsible for organising public transport in the Paris region, and Chairman of the Ile-de-France regional authority, at its La Rochelle site attended by Ségolène Royal, Chairwoman of the Poitou-Charentes regional authority, and Jérôme Wallut, CEO of Alstom Transport France.

This tramset is the first of 70 that were ordered in January 2011 for lines T7 and T8. The STIF will finance this equipment pursuant to the RATP/STIF leasing financing agreement for tramsets. The T7 line is 11.2 km long and will serve 18 stations between the municipalities of Villejuif and Athis-Mons from the end of 2013. A line extension is planned between Athis-Mons and Juvisy-sur-Orge in a second phase.

The visit was a chance for the chairman of STIF to see the progress made in the manufacture of the trams and to drive the first tram on Alstom Transport’s test track at La Rochelle.

Thanks to the modular Citadis design, Alstom was able to provide a custom product both inside and out. The trams’ design is the result of collaborative work by STIF, RATP and Alstom teams.

Each of the T7 and T8 Citadis tramsets are 32 metres in length and 2.40 metres wide, and can accommodate over 200 passengers – the equivalent of more than three buses. Designed to offer optimal quality of life onboard, Citadis trams feature platform-height floors, air conditioning, a video-surveillance system and a passenger counting system, as well as onboard audio and visual information. Wider seats and more accessible door-opening buttons are just two of the improvements designed to facilitate travel for those with mobility issues.

In addition, Citadis is up to 98% recyclable, which helps to preserve the environment. A Citadis tram consumes four times less energy than a bus and 10 times less than a car1 . The Citadis also enhances the quality of city life: nearly four times quieter than motor traffic, it generates less than five decibels of noise.

Alstom helps to build skills and generate jobs in France with its tram business, which accounts for 1,100 of Alstom Transport’s 8,700 jobs in the country. Six of Alstom Transport’s ten French sites play a part in developing the Citadis tramsets: La Rochelle for their design and manufacture, Reichshoffen for manufacture, Ornans for the engines, Le Creusot for the bogies, Tarbes for the electronic and electric traction drive equipment and Villeurbaine and Saint Ouen for the onboard IT system and passenger information.

A further 20 tramsets are projected under the second tranche of this contract, for use on the T8 line that will link Saint-Denis to Epinay-sur-Seine and Villetaneuse. The RATP will ultimately have the largest inventory of Citadis trams in the world, with 145 tramsets, including 60 for the T2 line (Porte de Versailles – Pont de Bezon), 46 for the T3 line (Pont de Garigliano – Porte de la Chapelle) and 19 and 20 for the T7 and T8 lines respectively.The STIF and the RATP will be receiving trams of proven value that today set the worldwide performance standard.

To date, more than 1,600 Citadis trams have been sold to nearly 40 towns and cities throughout the world, including more than 800 for 20 towns in France. They have carried more than 5 billion passengers (2 million a day) and have demonstrated their reliability over more than 400 million km.

1 – In kWh per seated passenger.