The electrification of the 94 bus route follows the 43 and 134 routes in 2019, bringing the current total of electric buses in London to 280. 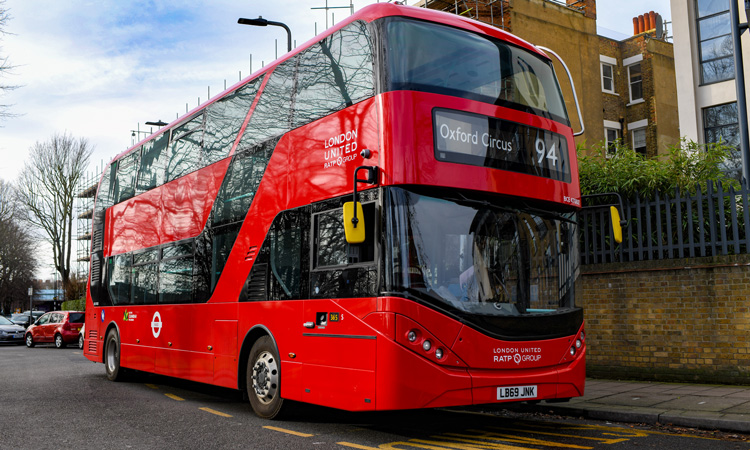 Transport for London (TfL) has announced that the 94 bus in London, operating between Acton Green and Piccadilly Circus has become London’s third all-electric bus route.

In addition to cleaning London’s air and tackling the climate emergency, the buses are also said to have a range of customer benefits and innovative safety features. Customers travelling on the 94, operated by RATP Dev, will reportedly experience fewer vibrations, and have access to free-to-use USB charging points.

Buses on the route also feature new safety features that are said to be in line with TfL’s Bus Safety Standard guidelines and will be involved in the trial of an acoustic vehicle alerting system (AVAS) that alerts road users to the presence of quieter running electric vehicles.

Heidi Alexander, Deputy Mayor for Transport, said: “At City Hall we are doing everything in our power to tackle London’s toxic air crisis and the climate emergency. I am delighted to launch the third route in London that will exclusively use electric double-deck buses and, with many more set to follow by the end of the year, we are continuing to make real progress towards improving air quality in the capital. Today’s initiative forms part of our plan to make London’s entire bus fleet greener and cleaner, which is set to reduce bus NOx emissions across the capital by an average of 90 per cent by October 2020.”

Catherine Chardon, Managing Director of RATP Dev London, added: “Bus electrification is a key priority for RATP Dev and we are pleased that these new buses on the 94, and further routes on the RATP network in the future, will support the mayoral strategy for a cleaner, greener London.”