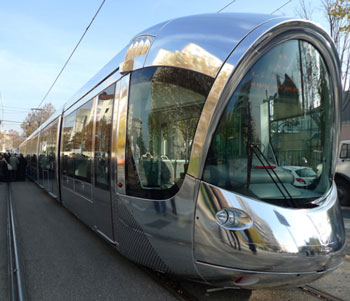 In 2012 Alstom Transport had a record year with the entry into service of 270 Citadis tramways built in France. These tramways were delivered to the agglomerations of Algiers, Brest, Casablanca, Dijon (Lines 1 and 2), Le Havre, Lyon, Montpellier (Lines 3 and 4), Orleans (Line B), Rotterdam, Rouen, Tunis as well as the extensions to Lines T2 and T3 of the Ile de France tramway for the STIF and the RATP. 2012 was also a record year in terms of production. In 2012, in average, one Citadis tramway has rolled off the Alstom’s production lines every 18 hours.

Besides these entries into service, other projects are in progress in France (Aubagne, Bordeaux phase 3, Le Mans, Nice, Toulouse, Tours, Valenciennes, Lines T7 and T8 for the STIF and the RATP in the Ile de France region) and also abroad (Dubai, Nottingham, Tunis).

Innovation is at the heart of the Alstom Transport strategy to improve the urban environment.

For example, ground-level power supply (APS) makes it possible to do away with overhead contact lines to preserve the historic character of cities.

Besides this, the Appitrack system used for laying track in Algiers, Jerusalem, Nottingham, Orleans and for the Toulouse tram permitted a considerable reduction in track laying times (6 months instead of 18 months with a conventional system) as well as noise pollution.

Finally, Alstom Transport’s latest innovation, Citadis Compact, is intended to make the tramway accessible for medium-sized urban areas. The Communauté d’Agglomération du Pays d’Aubagne et de l’Etoile will be the first to operate Citadis Compact in 2014, when it inaugurates a first 3 km section with 5 train sets.

All these agglomerations have the guarantee of reliable and proven equipment. To date, 1,600 Citadis train sets have been sold to 40 cities throughout the world including 830 to 20 French cities. A total of more than 4.8 billion passengers have been transported and more than 400 million kilometres covered.