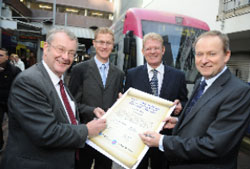 A £130 million package of improvements for passengers on the Midland Metro has been underpinned by a groundbreaking partnership between transport authority Centro and the tram system’s operator National Express.

The agreement – Metro Forward – will see the two organisations working closely together to drive forward a raft of enhancements for the system running between Wolverhampton and Birmingham.

Commitments set out in the document include:

The partnership agreement sets out National Express Midland Metro’s (NXMM) continued operation of the system on Centro’s behalf over the next six years with the two organisations working closely together to maximize the benefits offered by a new fleet of trams and the forthcoming extension through Birmingham city centre, due to open in 2015.

Cllr McNicholas said: “The Metro is the region’s most reliable and punctual form of public transport and already offers passengers an excellent service.

“Yet this new agreement cements the commitment of our two organisations to bring passengers even more benefits and to work closely together as the system undergoes some exciting changes, not least the return of trams to the streets of Birmingham.”

Mr Coates added: “This new agreement will see big customer experience improvements to an already industry leading service. It is also great news for the region with 1,300 extra jobs being created and a £50million a year boost to the economy.”

The agreement will see a joint Metro Forward taskforce press ahead with a number of initiatives designed to benefit passengers.

The new fleet of bigger trams will start to go into service in 2014 and will enable Centro and NXMM to increase the system’s frequency to 10 trams an hour throughout the day.

This will increase the existing system’s capacity by 40 per cent, easing the overcrowding that can sometimes occur during the morning peak as a result of the Metro’s popularity.

The taskforce will also drive forward other quality improvements such as enhanced driver and conductor training.

More than £128 million is being spent on the 20 new trams, an extended maintenance depot at Wednesbury and an extension from Snow Hill Station, along Upper Bull Street, Corporation Street and Stephenson Street where it will stop outside New Street Station which is currently undergoing a £600 million rebuild, also due for completion in 2015.

The joint project by Centro with Birmingham City and the Black Country councils, will revolutionise the way people travel around the city giving a convenient link between Birmingham’s two major rail stations.

It will also provide a much needed and easy connection from New Street to the emerging business district at Snow Hill, the unique and historic Jewellery Quarter and out into the Black Country on the existing Midland Metro line.

The extension will also serve as a platform for future Metro routes such as to the city’s forthcoming high speed rail station and Centenary Square.