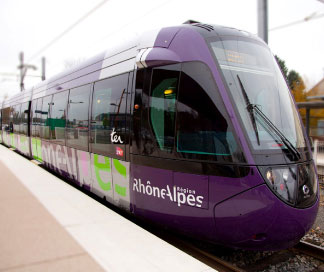 Citadis Dualis contributes in boosting the economy of France’s regions, for it is designed and assembled in Alstom Transport’s French facilities, including the site in Villeurbanne (on-board electronic and signalling systems) which employs close to 700 employees. Other facilities taking part in its manufacture are Valenciennes (Nord-Pas de Calais Region) for engineering and tram assembly, Le Creusot (Burgundy) for bogies, Ornans (Franche-Comté) for motors and Tarbes (Midi-Pyrénées) for the traction systems.

Designed to bridge city center and its suburb, Citadis Dualis is able to penetrate the city core as a tram and travel along regional railway tracks, thanks to special features involving power, safety and comfort. This kind of configuration makes it a versatile, innovative and efficient mode of transport which can go some way towards fostering a modal transfer from private cars towards public transport. Compared with a standard Regional Express Train (TER), Citadis Dualis’ acceleration capacity gives it the means to provide better segmented service within suburban areas, calling at more stations without increasing travel time from one end of the line. As a result, pursuing the development of this kind of tram throughout the Paris Region and across the railway networks surrounding France’s major and medium metropolitan areas is clearly a crucial issue in improving commuter travel.

Alstom Transport France Managing Director Jérôme Wallut stated that “Citadis Dualis is the result of Alstom’s know-how, shared with its partners in France’s rail industry sector. It was designed for and with the regions. Using a French solution that is both technically and economically efficient, it contributes in meeting the new needs in suburban mobility which are emerging all over the country.”