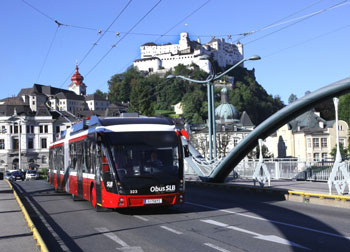 Salzburg maintains its commitment to eco-friendly electric mobility with quiet and clean trolleybuses. As part of its continued development of public transport, operator Salzburger Lokalbahnen has ordered 26 new trolleybuses from Solaris with an option for an additional 14 vehicles. They will be delivered by 2017.

Like the previous delivery, the new Solaris Trollino 18 for Salzburg will be built to the striking MetroStyle design, underlining how attractive an option public transport is. Besides the dynamic exterior styling, passengers will enjoy highest standards of comfort in an interior where every attention has been paid to detail.

Gunter Mackinger, Director and Operations Manager of Salzburger Lokalbahnen, comments: “We are delighted to have a tried and tested product in the further MetroStyle articulated trolleybuses from Solaris, which meet the high demands of our customers and staff. This allows us to successfully continue along the consistent path of expanding electric public transport in Salzburg.”

Solaris CEO Solange Olszewska is happy to be able to support the development of Salzburg’s trolleybus system: “With its consistent commitment to sustainable public transport, Salzburg is Europe’s trolleybus capital. It is a great honour that we have been chosen to build Salzburg’s new trolleybuses. Our MetroStyle design will make the trolleybus in Mozart’s home city a real eye-catcher.”

Salzburg already operates 25 Solaris Trollino 18, delivered from 2009 onwards. While the first 15 of them were built to conventional styling, the ten most recent examples already turn heads with the attractive MetroStyle.

For Solaris, electric mobility has been part of the company’s expertise since 2001. Almost 600 trolleybuses have been built for customers in 13 countries. Solaris is the leading supplier of trolleybuses in the European Union and EFTA.