Posted: 6 November 2012 | Transport for Greater Manchester (TfGM) | No comments yet 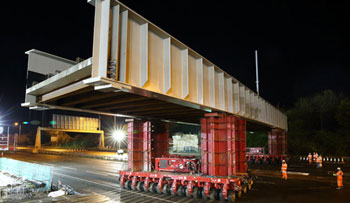 An impressive Metrolink construction feat took place this weekend, when a 580-tonne bridge that will carry passengers to Manchester Airport was moved into place over the M60.

The superstructure, specifically designed to be installed during a single motorway closure, is one of two bridges on the new tram line currently under construction.

The work – scheduled to take place during a 24 hour closure (10pm-10pm) of part of the M60 – was finished a full eight hours early, meaning that drivers were back on the road by 2pm yesterday (Sunday 4 November).

Councillor Andrew Fender, Chair of the Transport for Greater Manchester Committee, said: “I’d like to congratulate all those involved in this impressive construction feat, particularly the contractor MPT, for getting the work done so quickly and smoothly.

“An enormous amount of planning clearly went into ensuring this superstructure could be installed with the least amount of inconvenience to road users – both in the design of the bridge and the execution of the road closures.

“That planning has paid off and a major step forward taken in bringing tram services to Wythenshawe and the Airport.

“I’d like to thank drivers for their patience and understanding during the road closures, which caused heavier traffic than normal around the Princess Parkway area.

“This short term inconvenience will be far outweighed by the benefits of the new Metrolink line, which I’m sure will take many car journeys off the road in the long term.”

Bryan Diggins, MPT Project Director, said: “It’s projects like this that really bring home the excitement of civil engineering. After months of preparation, the bridge move went like clockwork, and we were delighted to release the motorway back to road users.”

A further closure – of the M56 between Junctions 2 and 5 – will take place from 10pm on Saturday 24 to 10pm on Sunday 25 November, when a second superstructure is installed.

The closure will start to be introduced at 9pm, with lane closures in advance of each approaching junction, ahead of the motorway closing in full in each direction from 10pm.

Metrolink and TfGM have worked closely with the Highways Agency to plan the closures, avoiding any major events, such as Premier League football matches.

More information will be available closer to the time of the closure through the Highways Agency and TfGM websites.

Metrolink construction work on new lines out to Manchester Airport, East Didsbury, Oldham and Rochdale town centres and Ashton-under-Lyne is being carried out by MPT.