London’s Ultra-Low Emission Zone (ULEZ) has seen nitrogen dioxide pollution cut by a third in the capital since its introduction in April 2019. 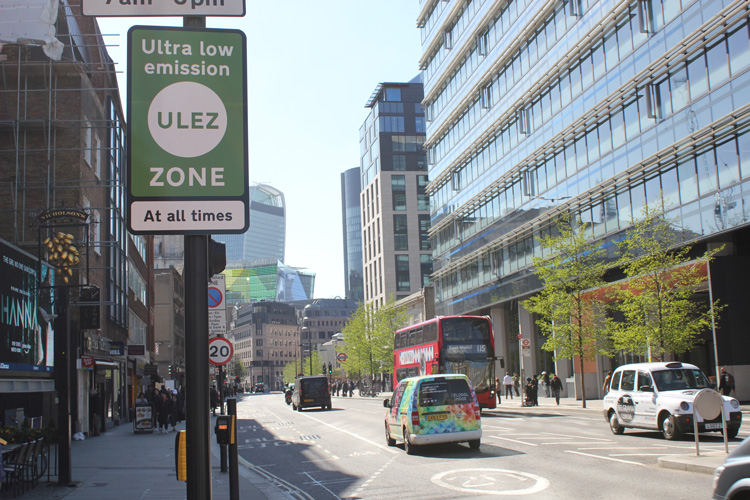 London City Hall has published a report on the first six months of the Ultra-Low Emission Zone (ULEZ), which aims to cut air pollution in the city.

Quarterly averages have revealed that levels of nitrogen dioxide (NO2) on roadside monitors have fallen from 89 µg/m3 in January to March 2017 to 57 µg/m3 in July to September 2019, which is a 36 per cent decrease.

The report stated that there are now 13,500 fewer polluting cars in central London every day, with 77 per cent of vehicles in the zone meeting ULEZ emissions standards. This is compared to 39 per cent in February 2017 and the 61 per cent in March 2019.

Traffic flow was noted to have also decreased in central London in May and September 2019 when compared to 2018, which is said to indicate the wider benefits of the ULEZ in encouraging people to switch to walking, cycling or using public transport.

Fine particulate matter (PM2.5), tiny air pollutant particles that reduce visibility and cause the air to appear hazy when levels are elevated, has marginally reduced, with the report stating that over 50 per cent of London’s PM2.5 emissions blow into the capital from outside sources.

In early October 2019, The Mayor of London, Sadiq Khan joined over 30 mayors from around the world to commit to reduce fine particulate matter (PM2.5) pollution in line with World Health Organisation (WHO) guidelines by 2030.

Sadiq Khan, said: ‘These figures prove without a doubt that ULEZ is exceeding expectations, reducing polluting vehicles and cleaning up our lethal air. I am determined to stop Londoners breathing air so filthy it is damaging our children’s lungs and causing thousands of premature deaths. The ULEZ shows what we can achieve if we are brave enough to implement such ambitious policies.

‘I now hope the government will match my ambition and amend their environment bill to ensure it has the legally binding WHO- recommended limits to be achieved by 2030 that we need to protect public health.’

How to plan demand-response and fixed routes together