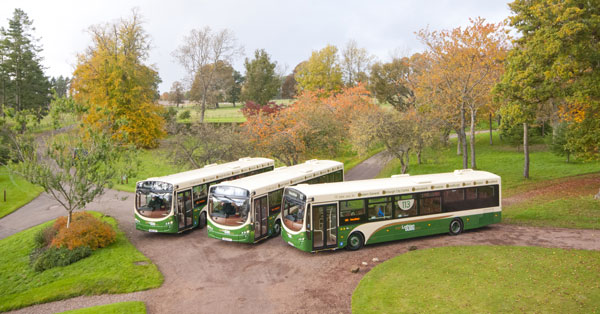 The Wrightbus full size single deck vehicles are all based on the operationally proven Volvo B7RLE chassis which features the economical and reliable 7.1 litre, Euro 5 EEV engine.

Displaying a distinctive new livery, which takes its inspiration from the former Eastern Scottish Bus Company, the buses are not only green on the outside but green underneath too. Featuring a modern Euro V emissions standard exhaust the buses emit considerably lower levels of air pollutants than the buses previously used on the route. They are also more fuel efficient meaning that the carbon footprint of the route will be much lower. Having recently been voted Best Large Green Company of the year at the 2012 Scottish Green Awards these buses are a further step towards Lothian Buses ongoing commitment to delivering environmentally friendly public transport.

Ian Craig, Managing Director of Lothian Buses, commented, “After four months in operation, we are delighted to be able to build on the current service we provide by making improvements for our customers. Our investment in new vehicles for this route shows our continued commitment to the people of East Lothian and to the local environment.”

The essential rural service also benefits from an improved timetable, which will include the introduction of an earlier morning journey from Pencaitland, an extra evening journey from the Western General Hospital and evening journeys extended to the West End from Fredrick Street. With the re-opening of the East End the service now provides a faster link to the city centre via Waterloo Place and Regent Road.

Ian Craig added: “We are delighted with growth on the route over the past few months and hope that the service 113 will continue to meet the needs and requirements of the local community.”

The launch of the new vehicles took place at the historic Winton House in Pencaitland, East Lothian.

Wrightbus Sales, Customcare and Planning Director Sam McLaren added, “Our long association with Lothian Buses means we have developed a close synergy with the customer and fully understand the operational requirements and quality levels they demand. As a result, we are always able to respond quickly and effectively tailor our build to meet Lothian Buses individual requirements.”

For full information on the East Lothian Buses and timetables please visit www.eastlothianbuses.com