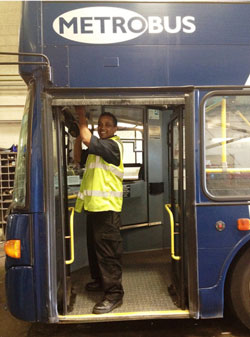 Kibrom Fitsum, bench technician at Eemits, is excited about the positive changes the Company will bring to Metrobus.

Kibrom Fitsum, bench technician at Eemits, is excited about the positive changes the Company will bring to Metrobus.

The company, based in Billingham, Cleveland, won a five-year deal with Metrobus on the back of a referral from a major UK transport company.

The new four-site, multi-channel equipment will give Metrobus more effective communication over a distance far larger than it has had before, while it also provides drivers with a panic button which will increase their safety whilst driving.

The contract is the latest step in Eemits’ national growth strategy as it continues to win new business from outside its native North East region.

The company has added a bench engineer to its team to facilitate this growth, with more new jobs likely to be created in the coming weeks and months.

Craig Matthews, managing director at the firm, said: “I was delighted that all the hard work and persistence finally paid off with the Metrobus contract. It is also very refreshing and encouraging that a growing North East-based company can actively seek and win major contracts out of the region, thus aiding that growth that we all crave for in these tough economic times.”

Ian Coyle, operations manager at Metrobus, added: “We chose to work with the team at Eemits Communications because they were able to provide a system that gave us 100 per cent coverage and this enables us to operate our bus network in the most efficient manner.”