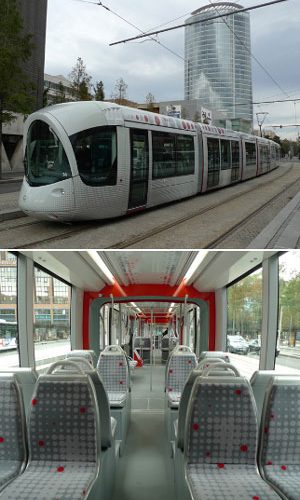 The first of the 12 high-capacity Citadis tramway for the Lyon urban area was presented in front of the Part-Dieu station in Lyon by Hubert Peugeot, Business Development & Sales Vice President of Alstom Transport France to Bernard Rivalta, President of SYTRAL (Lyon Urban Area Transport Union). 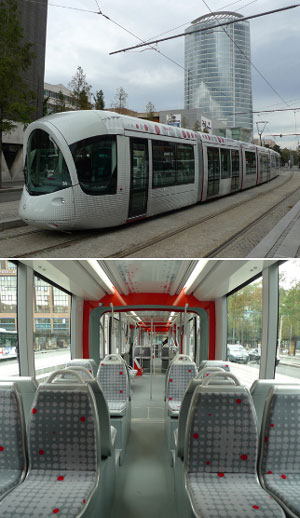 To respond SYSTRAL wishes for an aesthetic consistency of the tramway, Alstom has proposed a new design in respect to the original signature. For example, the new tramway’s interior which was designed by the company Avant-Première has been maintained. The harmony of “colours and fabrics” will be adapted around an innovative feature using LED-based strips to vary ceiling colors.

With the 12 new tramways, the Lyon urban area’s network will total 86 Citadis tramways making its network the 3rd largest in France. Citadis benefits from more than 10 years of feedback on the Lyon network, which will make it easier to incorporate new tramways into the existing system and optimise the line operating cost.

Citadis is helping to promote the economic dynamism of the French regions. The tramways are designed and assembled at the Alstom plant in La Rochelle. The other sites involved in the production are Villeurbanne’s – nearly 700 employees – in charge of on-board information systems, as well as Ornans for motors, Le Creusot for bogies and Tarbes for electric and electronic traction equipment. Alstom Transport projects have generated 27,000 direct and indirect jobs with French suppliers; 80% of the company’s procurement is supplied by 4,600 firms located in France. The introduction of the first high-capacity Citadis to the city of Lyon is the sixth entry in France since the beginning of the year after Montpellier, Brest, Rouen, Orleans and Dijon.