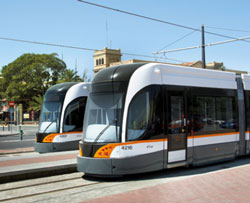 Rail technology leader Bombardier Transportation handed over the first FLEXITY tram of the new series to Poland’s Krakow Transport Authority, MPK Krakow, in the presence of the Mayor of Krakow, Jacek Majchrowski.

Bombardier Transportation and MPK Kraków have a long-standing partnership, which began in 1998 when the first order for 14 trams was placed. In 2001, MPK exercised an option for another 12 vehicles. Twenty-four additional trams were ordered in 2006 and have been in successful revenue service since 2007. MPK placed a fourth order, for 24 FLEXITY trams, in June 2010 bringing the total number of vehicles to 74.

The new FLEXITY Classic vehicles are 32m long trams with a width of 2.4m and offer a capacity for up to 229 passengers. Five wide double-door and two single-door entrances ensure rapid passenger flow. Multi-purpose areas provide space for pushchairs and wheelchair users. Air-conditioning in the passenger compartment and a passenger information system provide high travelling comfort.

Julian Pilszczek, CEO of MPK Kraków, said: “We are delighted with the design of this state-of-the art tram inspired by the spirit of the City of Kraków. The vehicle’s most prominent features are the blue ceiling with LED lighting, an allegory to the stars in the sky, and the city arms with the Kraków dragon on passenger seats. These new, modern trams will shape the future cityscape of Kraków.”

The first public presentation of the new tram for Krakow took place in September 2012 at the InnoTrans in Berlin; the world’s largest international railway fair.

Germar Wacker, President, Light Rail Vehicles, Bombardier Transportation, said: “This fourth order in a row confirms MPK’s confidence in Bombardier as a supplier of proven urban transport solutions. I would like to thank MPK for their long-standing partnership and am very proud to hand over a tram with a state-of-the-art design offering excellent passenger comfort and accessibility as well as optimized energy consumption, maintenance and overall lifecycle costs.”

Janusz Kućmin, Chief Country Representative for Bombardier Transportation, Poland, said: “At present, the city of Krakow has one of the most modern public transport systems in Poland and the biggest fleet of reliable low-floor FLEXITY trams in the country. I am glad that the trams we produce became an inherent element of the panorama of this beautiful city.”

Other examples of the FLEXITY tram family are already in successful revenue service in cities such as Adelaide, Berlin, Bremen, Dresden, Essen, Frankfurt/Main, Gdańsk, Kassel, Leipzig and Łódź.

More than 1,700 FLEXITY trams are in successful revenue service. A total of more than 3,500 Bombardier trams and light rail vehicles are in service or on order in cities across Europe, Australia and North America.