The Munich Public Transportation Company will be the first German transit operator to be supplied with the new Avenio tram…. 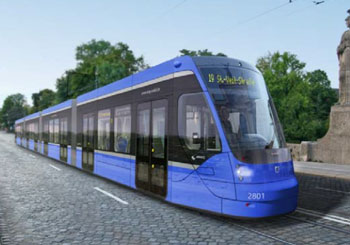 As part of its capacity expansion program, the Munich Public Transportation Company (MVG) will be the first German transit operator to be supplied with the new Avenio tram from Siemens. The Munich City Utilities (SWM) has today ordered a total of eight vehicles which are to be operated by its subsidiary MVG. Six trams, which are to be built at the Siemens plant in Vienna, are due to enter revenue service when the winter timetable goes into effect at the end of 2013. “For us, this is an immensely important order from a leading German customer. After all, the MVG is one of Germany’s largest mass transit operators. And, as this is the first order to be placed for our new Avenio tram within Germany, it’s something very special,” said Jochen Eickholt, who will take charge of the Siemens Rail Systems Division as from October 1.

“We are very pleased that Siemens has developed a new vehicle with a concept that has already proved itself in Munich. That gives us a good feeling as far as the vehicle’s compatibility with the specific requirements of our Munich tram network is concerned”, said MVG CEO, Herbert Koenig.

With around 220 seats, the Munich vehicles (referred to as T1 at the MVG) will offer roughly the same seating capacity as the R 3.3 (Bombardier/Siemens) and S (= Variobahn; Stadler) trams. They will join the existing trams to form one common vehicle pool and will be deployed wherever there is a need for a high capacity. Based on current information, this will involve lines 17, 19, 20, 21 and 22.

The Avenio is Siemens’ new tram platform and has already been ordered by customers in The Hague and Qatar. As an end-to-end low-floor tram, it provides stepless access for around 220 passengers. The interior is bright, has no steps and offers ample seating in the passenger area. For an enhanced sense of security, passengers have a clear view of the entire vehicle. “Our modular concept ensures that the Avenio fits the bill in any city and that can even be deployed where the infrastructure may not be so perfect. For example, existing lines can be used without the need to renew tracks, reinforce structures or reroute around tunnels. This is all due to the synthesis of a single- and multi-articulated tram,” says Sandra Gott- Karlbauer, CEO of the Metro, Coaches and Light Rail Business Unit, describing the benefits of Avenio.

Avenio’s low axle loads allow it to travel quietly on old lines, to minimize wear on vehicle and track, and to reduce energy consumption. Siemens engineers also succeeded in substantially reducing the driving and braking noise emitted by the vehicle – a major benefit not only for passengers but also for passers-by and residents. Over 90% of the Avenio is recyclable.