The first Citadis tramset for the Tours metropolitan area is unveiled

On 28 September 2012, the first Citadis tramset for the Tours tramway was delivered… 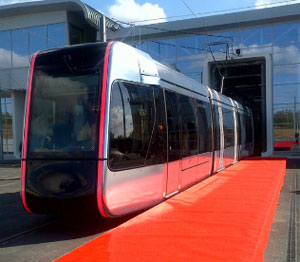 On 28 September 2012, the first Citadis tramset for the Tours tramway was delivered to the maintenance centre at a ceremony presided over by Jean Germain, Mayor of Tours and President of the Tours metropolitan area. Also in attendance were Jean-Pierre Farandou, Director of Kéolis, and Jérôme Wallut, Managing Director of Alstom Transport France. Tours’ first tramset – built at Alstom’s Reichshoffen site (Alsace, France) then tested at its Aytré site (France) – left the Charente-Maritime French department in the morning of Monday 3 September, bound for Tours.

SITCAT, the transport union for the Tours metropolitan area, selected Alstom to supply rolling stock for its first 15-km tramway line. Featuring 29 stations, it will eventually be able to carry 54,000 people per day. The contract, signed in September 2010, provides for the supply of 21 Citadis tramsets, together with Alstom’s catenary-free APS ground-level power supply system. Each tramset is 43 metres in length and can carry over 280 passengers (the equivalent of five buses).

The unique design of Tours’ Citadis tramsets is the result of close collaboration between the “Ensemble(s) la ligne” designers and Alstom Transport’s own Design & Styling teams. The tramsets have been customized without compromising on any of the technical elements that distinguish the Citadis range: optimal on-board quality of life, plus maximum passenger comfort ensured by features such as platform-height floors, air-conditioning, a CCTV system, and audio and visual information.

The “Loire river mirror” outer skins reflect the surrounding urban environment. The front end of the Citadis features two vertical strips of lights. The arrangement of these strips relative to the rails creates the impression of a cursor moving along the line.

The inside fittings are modern, fluid and comfortable, and feature lighting levels that are automatically raised or lowered depending on the natural light, with softer lighting in summer and warmer lighting in winter.

After Bordeaux, Angers, Reims and Orléans Val de Loire, Tours will be the fifth urban community in France to use a Citadis tramway with Alstom’s APS ground-level power supply system – a system that has already been used to transport more than seven million passengers over eight million km. Its main advantage is that it preserves the architectural authenticity of the sites through which the tramway passes, doing away with overhead electric lines thanks to a third recessed rail which provides power to the tramsets. Approval testing for Tours’ first tramsets will start in November 2012. Having already run 1,000 km on Alstom’s test track in Aytré, the first Tours Citadis will run another 1,000 km between the Marne and Beffroi stations starting in mid-October, before running the whole line in spring 2013. It is scheduled to come into commercial service in September 2013.

To date, more than 1,600 tramsets have been sold to nearly 40 towns and cities throughout the world, including more than 800 tramsets for 20 towns in France in three different versions (22-, 32- and 42-metres long). They have carried more than 4.7 billion passengers and have demonstrated their reliability over more than 400 million km. Alstom can therefore confirm the success of this model, which is much appreciated for its modular design and style.

Citadis is contributing to the economic dynamism of French regions. The tramsets for Tours are being designed and manufactured at Alstom’s plants in La Rochelle and Reichshoffen. Other Alstom facilities are also involved in their manufacture: Ornans is building the engines, Le Creusot the bogies, Villeurbanne the on-board electronics, and Tarbes the electrical and electronic equipment for the traction systems. This project will generate nearly 350 direct jobs over two years.

About Alstom Transport in France

With operations at ten sites throughout France, Alstom Transport is the leading manufacturing company in the French rail sector and helps boost local economies. Alstom’s 8,500 employees in France provide expertise to both French and international clients, and one job at Alstom creates about three jobs for its suppliers.