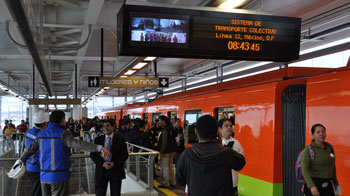 A range of developments and adaptations has been made by information display specialist Infotec to fulfil an order for a new rail line in Mexico City.

The construction of Line 12 was officially announced in 2007 and work is now nearing completion. It will be 24 km in length, serve 22 stations and link the districts of Tlahuac and Mixcoac, in the southern area of the city.

Although initially planned to be entirely underground, Line 12 has eventually been built underground only along its western half, while the rest is partly at grade and mostly elevated.

Leicestershire-based Infotec was approached by Alstom Canada to design and supply LED/TFT combined customer information displays for the Central American line. The request was for units that could provide both train running information and full colour advertising.

As well as the displays needing to provide two separate display technologies in a single case without one distracting from the other, there were a number of environmental factors that had to be taken into consideration by Infotec’s design engineers.

Mexico City sits on a high plateau and to ensure this would not impact on the displays they were altitude tested. Potential seismic activity has also been taken into consideration and Infotec fitted automotive grade on-board computers to take account of this.

Average winter temperatures don’t fall below 20 degrees C and in summer 28 degrees is normal. To prevent over-heating temperature sensors have been fitted to both display elements and if these register temperatures above a safety threshold the air-stirring fans we have fitted will come into operation. As an additional safety measure Infotec diagnostics will shut down the displays should a critical temperature be reached.

The displays are designed to interface over a single fibre optic IP link with the train-running and advertising software supplied by Alstom for the contract. The PC system controls have been integrated into the diagnostics software which provides the operators with complete control of the display and the ability to view its current status remotely.

Virtual receipts for the displays were signed by Alstom at Infotec’s base in Ashby-de-la-Zouch and all 82 displays have been air-freighted to Mexico out of nearby East Midlands Airport.

“Although we created the customer a bespoke solution, it was all developed from our standard range of display products, giving them that extra confidence they needed for this unusual project.”

Total completion of Mexico City’s Line 12 is scheduled for later this year.