Inauguration of the extension the CDGVAL line at Paris Airport 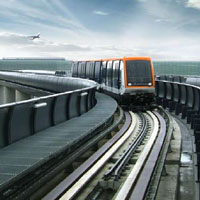 Aéroports de Paris has inaugurated service on an extension of the CDGVAL LISA line. The Liaison Interne Satellite Aérogare (LISA) line is the fully automated metro line at Paris Charles de Gaulle airport. This line, which already connects Terminal 2E to boarding gate satellite S3, has been extended, with no interruption or disruption to operations, through to the new S4.

For this 300 metre extension, Siemens Rail Systems supplied the rolling stock (eight new 26-metre long Val 208NG trains, each made up of two cars), the track-based and on-board automated systems as well as upgrades for the operations control center. Siemens also undertook the installation, integration and commissioning of the track formation equipment (track and switchgear), the station (platform barrier screens for the new S4 station involving 52 metres of screen for each platform), the depotworkshop, other fittings and high-voltage material (energy and traction points) and low voltage material (video, sound, variable signage, radio, communication networks, moving walkways).

LISA will operate 20 hours out of 24, seven days a week, and its capacity has risen to 7,900 passengers per hour, at intervals of two minutes between each train.

As part of its turnkey project for lines 1 and 2 of the CDGVAL which went into commercial service in 2007, Siemens Rail Systems had already supplied and installed 10 Val 208NG two-carriage trains equipped with on-board video, the operations control center, the automated systems, the track fittings, the high and low voltage equipment, the station platform barrier screens for eight stations and the maintenance equipment.