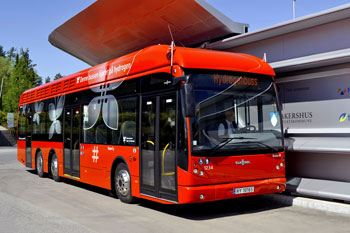 On May 30th, 2012 the new fuel cell buses for Oslo (Norway) were officially presented to representatives from the Oslo-Akershus region, which started this project 17 years ago. The 5 buses are now being used every day on the roads of the Norwegian capital. The order is part of the European hydrogen bus demonstration project.

Van Hool, which is becoming increasingly well known for its integration of the most advanced environmental technologies in public transport, was awarded an order for 5 fuel cell buses as a result of an international tender by Ruter A/S in Oslo. Van Hool’s considerable experience in supplying fuel cell buses for the United States, the number of comfortable forward-facing seats and the total passenger capacity were the aces up its sleeve when it came to secure this order.

The Van Hool fuel cell buses are 13m long with three axles. Three doors provide access to a lowered floor that extends as far as the central door. The bus has 37 seats, 34 of which are forward-facing.

The fuel cells are manufactured by the Canadian company Ballard Power Systems and, together with the lithium batteries and the Siemens electric motors, provide the bus with its power source.

The bus has a hybrid electric drive system. The hydrogen in the fuel cells is converted into electricity, with water vapour as the only emission, and the batteries provide additional power where and when necessary. Thanks to this hybrid drive and the recovery and reuse of braking energy, hydrogen consumption is restricted to approximately 30 kg per bus per day.

The bus, which has obtained European type approval, has gone through tilt testing up to 28° sideways and an extensive safety inspection in accordance with current norms.

The 5 buses are used on route 81A from Vestbanen (west of Oslo) to Greverud, travelling a distance of approximately 20 km.

The hydrogen filling station in Rosenholm was built by Air Liquide and produces more than 200 kg of hydrogen per day by means of water electrolysis, the equipment for which was supplied by Hydrogenics of Westerlo, Belgium. The green electricity required for the electrolysis of the water comes from a nearby hydroelectric power station and is almost entirely renewable, green and CO2 free from its origine until the end of the chain.

Van Hool is a Belgian independent bus, coach and industrial vehicle manufacturer. The company, established in 1947, is based in Koningshooikt (Belgium). The vast majority of the vehicles produced are destined for Europe and America. Van Hool employs more than 4,000 people worldwide, most of whom work at the manufacturing plants in Koningshooikt and Bree.

Shaping the future of transport in Dublin