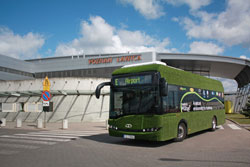 The Solaris Urbino electric bus has successfully completed its first period of regular, daily passenger service. For three weeks during the Euro 2012 football championship, it ran in the host city of Poznań, accumulating 3,000 kilometres without any failures. Solaris and its partner Vossloh Kiepe, the supplier of the electric drive-train technology, today offer operators electric buses that are fully homologated and ready for the challenges of everyday operation.

To match the theme of the Euro 2012 football championship, the outside of the Solaris Urbino electric was covered in artificial turf, turning heads as it silently ran through town. For 22 days, the Solaris Urbino electric worked scheduled passenger services between Poznań’s airport and the city centre, giving football supporters and other guests a taste of the spirit of innovation of Solaris. The daily mileage of 150 kilometres offered a lot of room for future intensification of operation thanks to rapid charging between the peak hours.

With its successful operation in Poznań, the Solaris Urbino electric has proven its ability to perform in daily use. The fully-homologated vehicle is ready for passenger service.

The bus used in Poznań already is the second of its kind. Like the first demonstration vehicle presented in autumn 2011, it is based on the Solaris Alpino LE midibus. The electric equipment is supplied by German specialist Vossloh Kiepe. Traction power remains unchanged at 120 kW and battery capacity at 120 kWh, but a new feature is a rapid charging solution for the batteries. At 100 kW charging power, it takes as little as one hour and a half to refill fully depleted batteries.

With further development ongoing, there is more to come. While the first two demonstrators will continue to be tested in various cities across Europe in the coming months, the next vehicle is already being built. It will take the Solaris Urbino electric into the standard city bus length of 12 metres. Plans for an articulated version have also been finalised, allowing Solaris to offer forward-thinking operators a full range of battery buses.

This flexibility in meeting operational requirements is made possible by the modular design of the electric system. Vossloh Kiepe’s technology is easily scaled. The system also is prepared for automated fast charging systems such as inductive power supply. This allows the batteries to be topped up along the route or at the terminus, putting paid to problems of limited operational range.

Like all Solaris buses, the Solaris Urbino electric is built exclusively in Solaris’ own factories in Środa Wielkopolska (bodyframes) and Bolechowo-Osiedle (final assembly) in the Greater Poznań region. Besides Vossloh Kiepe’s electric power train, other key components also are sourced from leading western European suppliers and will be familiar to operators from their existing fleets.

For Solaris, electric mobility has been a key field of expertise for more than a decade. As Europe’s leading supplier of trolleybuses and offering the largest range of diesel-electric hybrid buses, the company is able to build on significant experience in using electric powertrains for urban buses.