Buses move out of Corporation Street 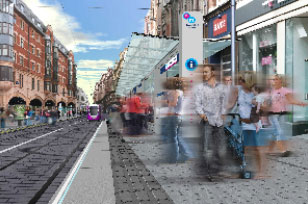 Artists impression of how Corporation Street will look

Buses will move out of Birmingham’s Corporation Street later this month as part of the on-going transformation of the city centre and its transport system.

Artists impression of how Corporation Street will look

The pedestrianisation of the street will take place on July 22 when its ten bus stops are relocated to new points, each no more than a five minute walk away.

The move has been widely welcomed by the business community and retailers who are keen to see the street handed over to pedestrians, offering a cleaner, more pleasant shopping environment.

The changes will also pave the way for work on the forthcoming Metro tram extension linking Snow Hill Station to New Street Station, which itself is undergoing the £600 million Gateway rebuild.

The tram extension, which along with the Gateway project is due for completion in 2015, will feature a stop in Corporation Street, delivering more than 3.5 million passengers a year directly into the heart of the shopping district.

Centro’s passenger services director, Stephen Rhodes, said: “We appreciate these changes mean moving the bus stops from Corporation Street but we will do everything we can to minimise disruption for passengers and for retailers and shoppers during the building of the tram extension itself.

“Not only will the work give Corporation Street a more attractive, boulevard-style atmosphere but it will improve the flow of buses around the city centre, giving passengers better reliability.”

The reorganisation of the city’s bus services will see stops located at six new passenger interchanges.

These will feature high quality shelters and travel information including maps and clear directions on how to get to the other interchanges and to key locations and attractions around the city.

Similar bus routes are being grouped together at the six interchanges to streamline services and reduce traffic congestion in the city centre.

During the coming months every bus stop and shelter in the city centre will be replaced by a sleek new design complementing the forthcoming tram stops and on-street information points.

Councillor Tahir Ali, cabinet member for development, jobs and skills at Birmingham City Council, said: “We believe the pedestrianisation and reorganisation of bus services, together with the Metro extension, a rebuilt New Street Station and a new John Lewis store can help underpin economic growth and job creation.

“The Metro extension alone will boost the regional economy by £50 million a year and create 1,300 sustainable new jobs, as well as help with the on-going improvement of public transport in the city.”

Jonathan Cheetham, Chair of Retail Birmingham, said: “Retail Birmingham is working closely with Centro and Birmingham City Council during the building of the Midland Metro Extension to ensure the city centre remains open for business and we support our retail members within the area.

“The Midland Metro Extension will deliver more visitors into the heart of the retail area, with stops on Bull Street, Corporation Street and Stephenson Street, but also includes significant public realm improvements to create a truly world-class walking and shopping experience through our city centre.”

A total of 14 public exhibitions giving full details of the bus service improvements will be held around the city centre until July 29. The first event, aboard the Centro exhibition bus, takes place between 9:30am and 3pm tomorrow (Friday July 6) by the markets in Edgbaston Street.

Dozens of marshals will also be at city centre bus stops between July 15 and July 29 to provide passengers with information and directions, while information posters will go up at stops throughout the city centre and on board buses.

Full details on the new bus stop locations as well as the forthcoming exhibitions can be found at http://www.networkwestmidlands.com/