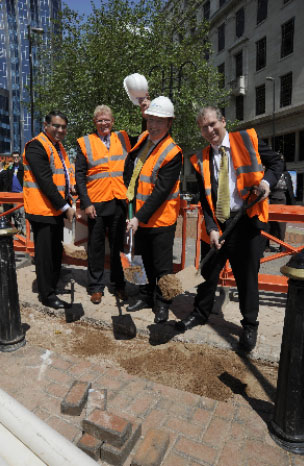 Transport Minister Norman Baker has launched work on a multi-million pound project that will see trams return to the streets of Birmingham for the first time in more than half a century.

Mr Baker started the dig at the junction of Corporation Street and Bull Street as the task got underway of moving the spider’s web of water pipes and power cables running beneath the city’s streets.

The work by Centro, the region’s transport authority, is the first phase in the construction of the Midland Metro extension which will run from Snow Hill Station to New Street Station, creating more than 1,500 sustainable new jobs and boosting the regional economy by more than £50 million a year.

Mr Baker said: “This scheme is great news for Birmingham and the West Midlands and will provide a new, greener transport choice for those wanting to reach the city’s shopping streets as well as the emerging business district in Snow Hill.

“The Metro extension will also cut congestion, improve air quality and be a real boon for the local economy by creating 1,300 new jobs.

“This is an example of the kind of infrastructure project we need to help boost growth around the UK and that is why I am pleased that we have been able to contribute £75 million towards the cost of the scheme.”

The extension will not only link Birmingham’s two major rail stations to the historic Jewellery Quarter and beyond to the Black Country, but will also deliver more than 3.5 million passengers a year directly into the heart of the city’s shopping district.

Trams will follow a route from the existing Metro terminus at Snow Hill, along a £9 million viaduct already built by developer Ballymore, down Upper Bull Street and Corporation Street and on to Stephenson Street.

The extension is part of a wider £127 million joint project between Centro and the Black Country and Birmingham City councils which includes a larger Metro maintenance depot at Wednesbury and a fleet of 20 new and bigger trams that will increase passenger capacity and frequency of service between Birmingham and Wolverhampton to every six minutes throughout the day.

Centro’s Vice Chairman Cllr Jon Hunt said: “The start of work on the Metro extension is a real milestone in the transformation of our city’s transport system.

“It will not only bring jobs and increased economic activity but will also help create a much improved shopping environment especially in Corporation which will be cleaner, quieter and far less congested.”

Cllr Tahir Ali, Birmingham City Council’s Cabinet Member for Development, Jobs and Skills, added: “The economic advantages of rapid transit networks are well documented yet Birmingham remains the only city of its size in Europe without one.

“This extension will start to put that right and serve as a platform for further routes to key locations like the airport and the forthcoming high speed rail station. That will help Birmingham and the West Midlands compete for jobs and investment in an increasingly fierce global marketplace.”

Work on the extension will see Corporation Street permanently closed to traffic later this summer with bus stops switched to new locations no more than a five minute walk away.

Full details on the new bus stopping locations will be publicised over the coming weeks through a comprehensive passenger information campaign.