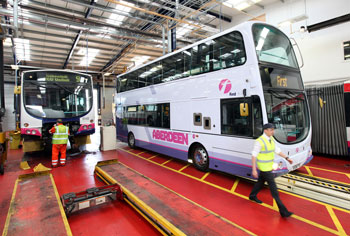 First Aberdeen today revealed that its entire bus fleet is set for a makeover as part of a wider ranging plan to invest in its services and improve bus travel for First Aberdeen customers.

Two double deckers from First Aberdeen’s 150 strong fleet were on display this morning at the company’s King Street depot parading a brand new purple, lilac and white livery. First Aberdeen is investing around £300k to update its fleet in the new colours and improve the interiors of many of its buses.

The two double deckers will enter service this afternoon for the first time sporting the new livery, which for the first time features Aberdeen branding. Customers will be able to feedback their thoughts of the makeover via First Aberdeen’s recently launched twitter feed, @FirstAberdeen.

Operations Director of First Aberdeen, Duncan Cameron, said: “I think the two buses on show today look fantastic. I’m delighted with the results and very much looking forward to seeing the rest of our fleet undergo this transformation.”

Duncan Cameron also spoke about other plans for the business: “The new livery is part of an overall plan to improve our customer proposition in Aberdeen. We are in the process of conducting a network review, which following consultation with customers and stakeholders, we hope to launch in September. The aim of that review is to improve the network and encourage more passengers on board our buses. I’m looking forward to unveiling the details later in the Summer.

“In addition, we hope to invest in some brand new vehicles early next year. In the meantime, our punctuality and reliability figures are extremely good – it’s an exciting time for First Aberdeen.”

Meanwhile, Jason Grant, Coach Builder at First Aberdeen, will have the colossal task of refreshing many of the buses in the Aberdeen fleet. “I really like the new design,” said Jason. “It gives our buses a bit of a re-fresh and I think it makes them look more appealing.”

It will take Jason (38 from Sheddocksley) around 40 hours to complete a single decker and 60 hours a double decker. “It’s a long process, but very satisfying,” he said. “I take a great deal of my pride in my job – it’s important to me and the company that our buses look good and help attract passengers.”

The new livery programme for First Aberdeen forms part of an overall FirstGroup strategy to provide new liveries for its entire 8,000 bus fleet across the UK.