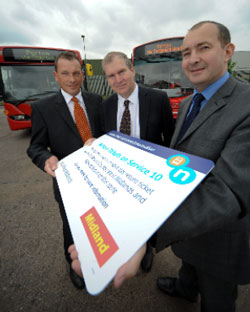 Bus passengers in the Black Country are set to have an easier ride with the launch of a landmark ticketing agreement in the West Midlands between two operators.

The deal, facilitated by Centro, has been struck between National Express West Midlands and Midland Buses for the Number 10 service between Wolverhampton and Perton.

Both firms run buses on the route and for the first time passengers who buy a return ticket on one operator’s buses can use it on either company’s service for their journey back.

It is the first arrangement of its kind in the West Midlands and was made possible following the voluntary multilateral agreement between Centro, the region’s transport authority, and bus operators following the Wolverhampton and west Walsall review in 2011.

The review saw the timetable on the No 10 route become more co-ordinated with evenly spaced gaps between buses from which the ticketing arrangement is a direct result.

Stephen Rhodes, Passenger Services Director for Centro, said: “This is a real breakthrough and exactly the sort of development that passengers want.

“It is this kind of versatility that makes bus travel even more appealing and practical for the travelling public and I look forward to similar arrangements being rolled out across the West Midlands network.”

Councillor Jon Hunt, the deputy chairman of Centro, said: “This is all about what is best for passengers. As a passenger you want to be able to get on and off buses with the minimum of fuss and this arrangement is very encouraging.”

Andy Foster, Head of Network Management for National Express West Midlands, said: “Since the Wolverhampton bus review we have seen an increase in passengers – up to three per cent more in the city centre.

“Innovative ideas such as this will cement and build on that growth.”

Kevin Crawford, Operations Manager for Midland, said: “Where two operators can work together in such a way the big winners will be the passengers.

“I hope that this is only the start and that we can extend this to other routes.”