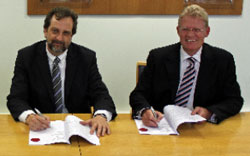 Centro and CAF have formally signed contracts on a deal that will bring up to 25 new trams to the West Midlands.

The Spanish manufacturer will supply the Urbos 3 trams in a deal worth in the region of £40 million.

The trams will replace the current 16-strong Ansaldo Trasporti fleet to deal with the expected growth in use of the Metro once the 1.3km (0.8 mile) extension between Snow Hill and New Street via Bull Street, Corporation Street, and Stephenson Street is open.

The new trams will start running from late 2014 on the current route from Snow Hill to Wolverhampton, with the Midland Metro extension from Birmingham Snow Hill to Birmingham New Street station coming on line in 2015.

The extension is expected to boost the West Midlands economy by £50 million a year and create 1,300 sustainable new jobs.

Geoff Inskip said: “I am delighted that we have formally signed contracts for this exciting new chapter in the story of the Midland Metro.

“The new Urbos trams are high-quality vehicles which will be a superb addition to public transport in the Midlands.”

Antonio Campos, Commercial Director of CAF, said: “CAF are thrilled to be involved in the line extension project and believe the trams will make a significant contribution to improving transport links between Birmingham and Wolverhampton.

“The Urbos 3 tram is a stylish vehicle and will add to the character of the West Midlands.”

The new, bigger trams will provide far greater passenger capacity between Birmingham and the Black Country.

The five section air-conditioned tram has a passenger capacity of approximately 200, compared to 156 on the current trams, has two dedicated spaces for wheelchair users and its features will be fully compliant with the Disability Discrimination Act.

CAF (Construcciones y Auxiliar de Ferrocariles) is based in Zaragoza and has recently supplied trains for the UK market, including the Class 332 trains for the Heathrow Express and 64 Class 333 trains for Northern Rail.

The Urbos 3 is built in Zaragoza, Spain. CAF has trams successfully in use in cities around the world including Zaragoza, Seville and Belgrade and are currently manufacturing trams for Houston and Nantes.

CAF currently employs around 50 people in the UK at offices in Coventry, Edinburgh, and Belfast and will project manage the introduction of the new vehicles from Coventry.