In the “Year of Multimodality” InnoTrans has been referred to as “Innovation Trans” and digitalisation has been coined as part of this process, through the use of apps and the predictive maintenance of the rails and rolling stock with the aid of digital technologies. 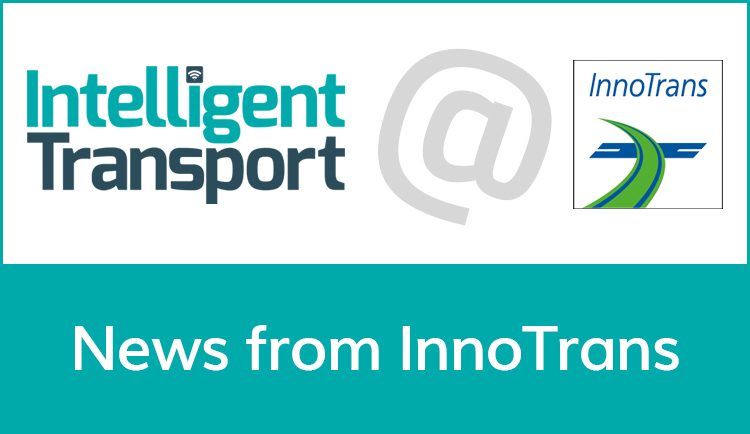 InnoTrans is of immense importance for the industry, and the scale of the conference this year has highlighted the value placed upon it by industry professionals.

Dr. Ben Möbius, Chief Executive of the German Railway Industry Association (VDB), mentioned two examples of this: the first is that the development of electro-mobility is already well advanced in Germany, with 90 per cent of the train mileage being achieved under electric power. Major efforts are currently being made to close the remaining gaps, in particular by using battery-powered trains. The second example referred to by the CEO of the VDB was automated systems, which also contribute significantly to passenger comfort. The result has been improved operating cycles and boosted energy efficiency by up to 30 per cent.

There have been many product highlights throughout the show, some of which are showcased below:

There is considerable potential for growth in the tunnel construction market. According to Dr. Roland Leucker, Chief Executive of STUVA e. V: “Tunnels are an indispensable part of an efficient rail network and should therefore also be featured at InnoTrans.” An indication of the size of the global tunnel construction market has been provided by a report produced in 2016 by the International Tunnelling and Underground Space Association (ITA). This revealed that annual economic performance in this area amounted to some €86 billion at the time. According to ITA estimates, the growth of past years is set to continue. In 2013 the association had forecast annual growth rates of five per cent for the following years, but in fact they exceeded seven. The forecast by the ITA is that it will remain at least at this level for the next five to 10 years. The annual growth rate of seven per cent in the tunnel construction market is twice as high as that for the construction sector as a whole. On average some 5,200km of tunnels have been constructed annually around the world since 2013. In terms of the distances involved this represents a 15 per cent increase.

The new Berlin S-Bahn light rail trains with air conditioning have also been featured at the event. The new Berlin S-Bahn (light rail) has retained its traditional red and ochre livery, but shape differs significantly from its ageing predecessors, which were increasingly prone to breakdowns. The 484 series has made its world debut at InnoTrans 2018, where the Stadler-Siemens consortium is presenting them for the first time as a half-train, i.e. as a four-car unit. They are due to begin trials in 2019 and will commence scheduled services in 2021. Passengers will particularly appreciate the wider connecting areas between the cars, as well as full air conditioning, and the S-Bahn also incorporates the latest technology. High definition flat screens mounted on the sides will provide information about the route, the doors will open and close automatically, and this will be indicated by LEDs. The entire train has a length of 73.6m, 184 seats and also space for passengers with reduced mobility, baby buggies and bicycles. Siemens supplies the propulsion and braking systems along with the electrical equipment, while Stadler is responsible for the design and production of the vehicles. According to Martin Hoffmann of Stadler, the trains are being “built in Berlin for Berlin.” He also announced that the S-Bahn will also be accessible during the public days at the weekend.

For German passenger rail transport the intelligent interconnection of vehicles and infrastructure is one of the main features of InnoTrans 2018. Among other things this interconnection provides new solutions for bus and rail use. Martin Schmitz, the Head of the Technical Division of the Association of German Transport Companies (VDV) said: “The public transport sector must seize the opportunities offered by digitalisation in order to meet the public’s growing mobility requirements, and to provide new and attractive services.” The VDV has developed a platform known as “Mobility inside”, enabling increasing numbers of customers to use the app provided by their local transportation authority to book tickets for public transport services all over Germany. A number of major transportation authorities as well as Deutsche Bahn are already connected to this platform.

The innovative EM100VT unit from the Austrian manufacturer of track construction vehicles, Plasser & Theurer, speeds up the track measuring process by a factor of 20 compared with existing methods. It is one of 140 products making their international debut at InnoTrans 2018. Equipped with a 360° camera and laser scanners, this vehicle uses digital scattering of the data it receives to create a “digital twin” of the track. This can be used to substantially speed up and rationalise the maintenance and renewal of the permanent way. Until now the measuring unit travelled over the track at just five kilometres per hour, but this has been increased to speeds of up to 100km/h. One of the factors enabling this increase is that the camera can make use of reflectors mounted on the power line masts to accurately register the position of the track. The vehicle can supply this data directly via the cloud to the processing machine.

The Rhein-Ruhr-Express (RRX) has windows that facilitate mobile reception; closer inspection reveals a fine honeycomb structure in the large windows. This is part of a high frequency solution to improve mobile phone reception in the new train that will soon form the backbone of the commuter services in the Ruhr region. It is making its world debut at InnoTrans 2018. The RRX design is partially double deck and partially single deck. Siemens Manager, Jens Chlebowski, explains that this arrangement enables electrical components such as the air conditioning to be installed on the roof of the single deck sections, making their maintenance at the new Dortmund depot much more efficient. For the first time, Siemens is responsible not only for supplying the trains for the RRX in Germany, but also for their maintenance for the next 32 years.

Andreas Busemann, Chairman of the board of Vossloh AG, explained: “Our display at InnoTrans features numerous innovations and world premieres from the analogue and digital worlds, raising the pressing issues of route availability, noise reduction and lifecycle costs to a new level. Under the main theme of ’The Smart Rail Track by Vossloh’ we are presenting our vision for an intelligent track.” More efficient information and communication technology as well as the targeted deployment of sensors and IoT technologies open up new possibilities. This paves the way for a predictive servicing concept that provides for a lasting reduction in maintenance costs and investment requirements. This includes new kinds of materials and improved track component designs. Volker Schenk believes: “They provide our smart product solutions with exceptional dimensional stability and a long service life, which manifest themselves in increased route availability accompanied by lower lifecycle costs.”

Battery-powered multiple units are an ideal replacement for highly polluting diesel locomotives on the 17,000km of branch lines in Germany that have not yet been electrified. However, not all batteries are the same. In a new report entitled “Battery Systems for Multiple Units”, commissioned by the Federal Ministry for Transport and Digital Infrastructure (BMVI), the technology association VDE shows which battery technology offers the fastest and most economical way of achieving a range in excess of 80km. In this report the VDE presents various battery technologies and solutions with regard to their suitability for use in multiple units. In summing up the authors recommended a new battery concept based on the cycles of innovation for lithium-ion batteries derived from the automobile industry and offering significant cost advantages. One positive side effect of this solution is that it provides for a wider and increasing range.

The metro trains from the Chinese manufacturer CRRC have many unusual features, beginning with the exterior surface. This is not made of metal but of a carbon fibre compound, as used in the latest aircraft. It reduces the weight and helps the trains to achieve maximum speeds of 140km/h. As the view on underground trains is not always very attractive, the windows on the CETROVO metro also serve as touchscreens. “Like a giant iPad they can be used to book tickets, passengers can even surf the internet. Alternatively, train operators can use the screen to display entertainment or passenger information”, as managers from this large industrial group explained at InnoTrans 2018. And out of sight, the fully actively sprung bogie and continuous magnetic traction system provide the propulsion and the comfort on the trains, which can consist of up to 12 two-car units. The bogie alone is 40 per cent lighter than on standard units and weight savings of 13 per cent have been achieved on the train as a whole.

With much more to come while InnoTrans continues we look forward to more highlights over the next couple of days.