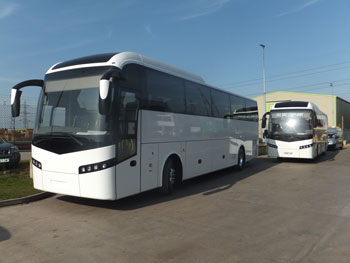 Volvo Bus had several vehicles on display at the Thomas Hardie Open Day in Deeside.

Volvo Bus has announced an agreement with Arriva North West for the production of 44 B5LH double decker buses with Wrightbus bodywork at the recent Thomas Hardie Commercials Open Day in Deeside, Cheshire.

Volvo Bus had several vehicles on display at the Thomas Hardie Open Day in Deeside.

The order, which will see 33 hybrids going into service for Arriva at Laird Street in Birkenhead and a further 11 in Bolton, is in part due to the recently announced Green Bus Fund.

Phil Cummins, Regional Engineering Director, Arriva North West and Wales, expressed his delight at concluding the order. “The Green Bus Fund has allowed us the ability to upgrade our bus fleet in the North West,” he explained. “The Volvo B5LH is a strong and reliable vehicle and we also really like the Wrightbus bodywork. Undoubtedly one of the biggest factors in our decision was the back-up and support we get from Thomas Hardie Commercials here in the North West. They’ve got dealerships here in Deeside, on Merseyside and in Manchester and that’s a big factor for us.”

Volvo Bus Sales Director, Phil Owen, said “Volvo Bus has been driving the development of hybrid technology over the last few years and The Green Bus Fund has given operators the freedom and incentive to invest in new green solutions. The Arriva North West order sees the production of 44 B5LH double deck buses, which is certainly good news for the people of the region.”

Over 20 customers visited the Deeside Bus and Coach Open Day, taking full advantage of the late March heatwave. Volvo Bus Regional Coach Sales Manager, Duncan Crosby, assured the availability of new and used vehicles on the day and these were widely viewed by all who attended. The line-up included Volvo’s flagship B13R 9700, a B9R Jonckheere, a pre-owned B12B, a 70 seat Plaxton bodied B7R and a B7TL double deck bus.

The event certainly proved successful for Volvo Bus with very strong interest in the B13R 9700 Prestige Plus coach and Duncan Crosby also sealed the deal for the sale of two pre-owned Volvo B7Rs. Further orders are also anticipated on the back of the event in the forthcoming weeks.

“Open Days are always really good for meeting customers face to face and allow them the opportunity to familiarise themselves with the type of vehicles we have available in our range,” explained Duncan Crosby. “We even had a few take the vehicles for a test drive today, which is fabulous because they can have hands-on experience of the latest advances and developments in Volvo technology.”

The vintage 1934 Albion PV70 on display, belonging to Mark Farrall of EC Farrall Ltd, also received a lot of attention.

“Everybody seemed drawn to the Albion and that’s not really surprising because it’s absolutely fabulous,” explained Thomas Hardie Depot Manager, Steve Francis. “I’m delighted the event has gone so well. We had Thomas Hardie, Volvo Bus, Roadcrew, Spill Hound and VOSA all present to meet and greet visitors. The Open Day has helped to highlight the availability and success of the Volvo bus and coach business out of our Deeside depot.”