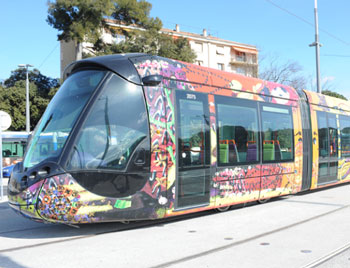 Christian Lacroix and Alstom have joined forces to develop fresh designs for the new Citadis tramways, which were unveiled on 6 April when lines 3 and 4 of the Montpellier tramways were inaugurated. This collaboration is further evidence of just how modular Alstom’s Citadis tramways are and the options they provide for customization.

In 2000, designers Garouste and Bonneti had customized the tramsets running on lines 1 and 2 of the greater Montpellier urban area. The multicoloured flowers and swallows that form part of their livery pay homage to both the renaissance of trams as a form of transport and the beauty of the region’s landscapes in summer.

The design of the new Citadis trams that were unveiled on 6 April is a reflection of Montpellier’s proximity to the Mediterranean coast (line 3) and the sunshine of the Languedoc Roussillon region (line 4).

The livery for the tramways on line 3 – which draws inspiration from 18th-century naturalists’ illustration plates – mainly comprises marine-related motifs, featuring fish and starfish against gradations of cool and warm colours, echoing the journey that the tram takes from the northern part of town through to the south. The front section of the tramways, together with their interior fittings, further underline this theme, using shapes and colours from the ocean depths.

The livery for the line 4 Citadis tramways takes its inspiration from old engravings. A blaze of gold set off by pearls, stones and jewels forms the backdrop for a series of architectural motifs borrowed from the Château du Peyrou and the Three Graces fountain, two nearby monuments.

According to Xavier Allard, director of Alstom Transport’s Design & Styling department, “The possibilities for customizing Alstom’s rolling stock are evidence of its desire to turn Citadis tramways into objects of expression that reflect the identity of the cities through which they run and to whose social and economic dynamism they contribute.”