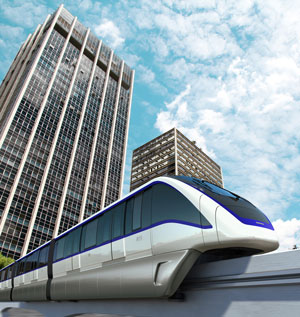 Bombardier Transportation today inaugurated a new, state-of-the-art monorail vehicle manufacturing facility in Hortolândia – São Paulo, Brazil. The new production site represents an investment of $15 million US and is Bombardier’s global production centre for Monorails, serving the fast-growing market in Brazil as well as export opportunities in Latin America and around the world. It will generate 250 new jobs directly dedicated to railway vehicle production, including aluminum carbody, bogie and final assembly activities. In addition, approximately 500 indirect jobs will be created based on increased activity in Bombardier’s local supplier base. The new investment underlines Bombardier’s long-term commitment to Brazil, a market where the company has been active for many years. The Hortolândia Monorail manufacturing site was built in just 18 months and will start its manufacturing activities immediately.

The first carbodies and bogies are already being manufactured there and the first completed monorail cars are expected to exit the assembly line later this year. The new site was designed and built following the most modern industrial standards worldwide and is based on technology transferred from Bombardier’s manufacturing and engineering hubs in Kingston, Ontario, Canada; St. Bruno, Quebec, Canada; and Pittsburgh, Pennsylvania, USA. André Navarri, President and Chief Operating Officer, Bombardier Transportation, participated in the inauguration ceremony at the new site. The 100 guests in attendance included the São Paulo State Governor, Geraldo Alkmin, the São Paulo State Transport Secretary, Jurandir Fernandes, the Premier of Québec, Jean Charest, the Minister of Economic Development of Québec, Sam Hamad, and representatives of São Paulo Metro and of other railway operators in Brazil, Bombardier suppliers and employees.

Mr. Navarri was joined by André Guyvarch, President, Brazil, Bombardier Transportation and Serge van Themsche, Vice President EMEA and Brazil, Systems, Bombardier Transportation. “This new monorail manufacturing site represents the second phase of Bombardier’s industrial expansion initiated in 2009 that aims to triple our number of employees in Brazil to 600 people and to quadruple the industrial area in Hortolândia,”

Navarri said. “Even more important than the new industrial facility is the advanced monorail vehicle we are going to manufacture here – a fine example of our continuous focus on technology development in order to offer interconnected modality of public transport across the globe. One of Bombardier’s key strengths is combining this worldwide experience with the local knowledge to deliver the best-fit mobility solution for each city individually.”

Navarri added: “The new high capacity BOMBARDIER INNOVIA Monorail 300 system we are building for São Paulo is game changing because it offers a transportation capacity similar to a metro, yet the light infrastructure required reduces the construction price and the implementation schedule by up to one half, bringing quality of life benefits to citizens sooner and more cost effectively. We are certain that once service operation starts, it will be acknowledged as one of the best mass transit solutions ever built.”

The INNOVIA Monorail 300 system is Bombardier’s newest transportation system technology. Cost effective to introduce without requiring major infrastructure or civil works, it offers transport capacity up to 48,000 passengers per hour per direction. Whether transporting visitors to out-of-town destinations, or offering high capacity, frequent services for more densely used inner city routes, the INNOVIA Monorail 300 ensures passengers experience the ultimate in modern ride comfort. Bombardier’s new manufacturing site is set to serve projects in Brazil as well as in the Latin America region. Its first order is the delivery of 54 seven-car INNOVIA Monorail 300 trains (378 cars) for Metro São Paulo. To ensure a successful and faster ramp-up of the project, one train (7 cars) will be produced and tested by Bombardier at the Kingston testing facility in Canada. The remaining Monorail cars will be produced at the new site in Brazil. The site will also result in a broader industrial development of the country due to the production requirements requested by Bombardier of its local suppliers. More than 15 companies have set up or expanded production in Brazil in response to Bombardier’s requests. In addition, the most advanced manufacturing techniques will be applied, using lightweight, highly resistant aluminum and composite materials, making Bombardier the first railway company in Brazil to introduce new technologies for aluminum carbody manufacturing.

“The fact that this advanced manufacturing facility was completed so fast and smoothly is primarily due to the extraordinary commitment of our staff in Brazil and in North America,” said André Guyvarch, President, Brazil, Bombardier Transportation. “I would also like to thank Metro São Paulo for having selected our advanced system to respond to the city’s mobility needs. Our team will do everything to meet expectations and the hopes of São Paulo commuters, who want to see the time they spend in traffic every day significantly reduced as soon as possible.”

Benefiting more than 500,000 users daily, Bombardier’s new INNOVIA Monorail 300 system will reduce journey times from almost two hours down to approximately 50 minutes between the stations Vila Prudente and Cidade Tiradentes on Metro São Paulo’s Line 2. Bombardier will design, supply and install the 24 km, 17 station system with BOMBARDIER CITYFLO 650 automatic train control. The first section of the new line, connecting the stations of Vila Prudente and Oratorio is expected to start passenger service at the end of 2013, followed by a second section in 2014. The line will be completed in 2016. Bombardier is a member of a consortium led by the Brazilian civil contractor Queiroz Galvão and also incorporating the construction firm Construtora OAS. With more than 60 systems in operation in many countries and more than 40 years of experience of managing transit systems, Bombardier is highly proven to deliver turnkey transportation systems anywhere in the world. It provides unrivalled support in maintaining fleet safety, availability, performance and reliability through its global operations and maintenance services network. Bombardier is committed to delivering the highest levels of system performance for the life of the INNOVIA Monorail 300 system in São Paulo and anticipates creating further high-skilled employment opportunities in Brazil.