Posted: 14 April 2012 | United States Department of Transportation | No comments yet 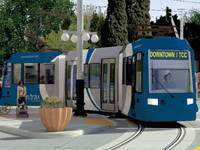 “Tucson is joining a growing list of American cities—from Portland, Oregon, to Charlotte, North Carolina—where the modern streetcar is spurring economic development, revitalizing downtown neighborhoods, and attracting a new generation of riders,” said Secretary LaHood. “The Obama Administration is committed to investing in strong transportation choices like these as part of an ‘all-of-the-above’ energy strategy to reduce our dependence on oil, relieve congestion and improve air quality.”

The Tucson streetcar line will serve a population of more than 85,000 people who live and work within walking distance of 17 planned stops. The service also fills a gap by offering direct, high-capacity transit connections between downtown Tucson, the University of Arizona, the Arizona Health Sciences Center and points in between. Travel times between the University District and downtown are expected to improve significantly over current bus service, once the streetcar line is operational.

The streetcar project is expected to create an estimated 1,200 construction-related jobs. Oregon Iron Works Inc./United Streetcar of Portland, Ore., a U.S. manufacturer of modern streetcar vehicles, has been awarded the contract to build the cars.

By United States Department of Transportation