Advantech, the leading global provider of computing and communications technology and platforms for harsh environments, will showcase its latest developments for the rail sector at InnoTrans 2018 in Berlin on stand 220 in Hall 4.1B. These innovations relate exclusively to products that have come onto the market in the two years since the last trade fair. 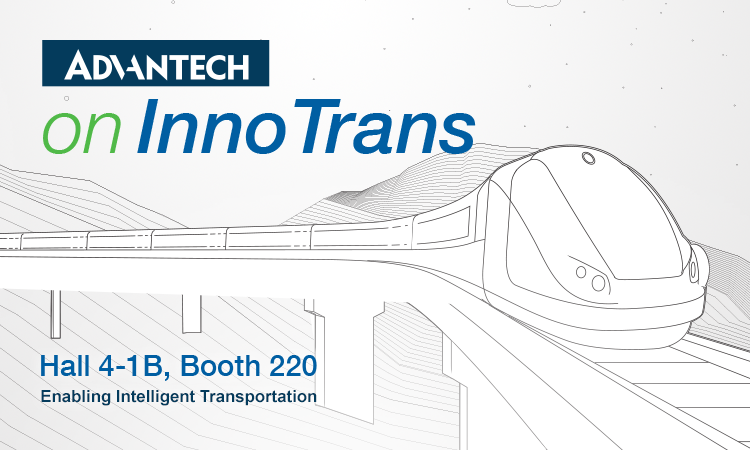 During the show in Berlin, customers will see Advantech’s products in realistic scenarios, such as the rapidly growing use of artificial intelligence (AI). Next, in a real-life scenario, Advantech will show how its wide range of products allowed a national rail operator to refurbish their entire train infrastructure, to support the latest in passenger Wi-Fi, screen and advertisement management, passenger infotainment system (PIS) and train-to-ground communication (T2G). Advantech will also be showing wayside control as used in a new project in Europe. Finally, the future rail communication will be showcased on our partner’s booth supported by Advantech, which will also replicate the condition-based monitoring system. This uses LoRaWan on rail-certified platforms to record operational and asset management data for trains and shunting yards. .

Advantech is also exhibiting its new storage servers, for video and administrative data. The ITA-5231S provides slot-in modules for up to four SSD drives and makes it possible, with the aid of its new 3D-NAND technology (which addresses up to 8TB on a single SQF-SSD), to store up to 32 TB in a 2U, 19” housing.

For visualisation, the new family of off-the-shelf 50155-certificated thin-client displays and monitors will be on view. The ITA-7000 product family comprises the standard sizes of 19”, 28” and 38” for passenger compartments. For the driver’s cabin the ITA-8000 two-touch-drivers’ panels are launched at InnoTrans. Advantech will also show a new example of itsfully-customised rail displays.

Where there are servers, there is also a need for intelligent switches. Advantech exhibits its latest Ethernet switches in Berlin. These include 8- to 28- port on-board backbone and consist network switches. For trackside application, the new series of SFP and RJ45 switches with EN50121 and NEMA TS2 will be shown, alongside a new GSM-R router, supplementing the offer of Advantech’s industry-leading GSM gateways. Other communication devices include the already mentioned EKI LoRaWAN gateway, the first to support EN-50155, and the small, compact EKI-6333AC access point.

Automation of train management systems, management, maintenance and digitalisation of passenger systems such as ticketing, counting systems, information and entertainment are ensuring dramatic rates of growth for the intelligent solutions developed specially for the rail transport market. Official passenger safety and data security regulations are giving this segment of the industry further impetus for growth.

Advantech’s products can help providers, system integrators, OEMs, train manufacturers and network operators to connect the numerous sensors, devices and machines on the train itself, the track routes and stations with the Cloud or centralised application. Advantech invites all interested parties to visit its stand 220 in Hall 4.1B to meet and discuss with our product, technology and rail experts.