Alstom has been awarded a contract to deploy its signalling technology… 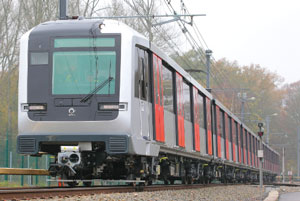 The Municipality of Amsterdam, owner of the local metro infrastructure, has awarded Alstom a contract to deploy its signalling technology on the four existing metro lines and on the new North-South line, currently under construction. The system will enable automatic train operation, increased capacity and the realisation of energy savings. The total value of the contract is approximately €100 million.

The contract includes the design, manufacturing and supply of a complete CBTC (communication based train control) system, based on Alstom’s proven radio-based Urbalis solution. The contract covers the complete replacement of the train control, signalling and train supervision systems and associated communications networks. The re-signalling work will be done at night without any disruption to existing operations. This contract reinforces Alstom’s leading position worldwide in the supply of advanced train control solutions, as it brings to 50 the number of metro lines put in service or equipped with the Urbalis product range over the last 10 years.

“We are delighted to contribute further to the modernisation of Amsterdam’s metro network, where we are also in the process of delivering new Metropolis trains – said Andreas Knitter, SVP Alstom Transport for North Europe Region – This new contract proves the extensiveness of Alstom’s leadership in all domains of signalling, after the two contracts we recently signed in Denmark for trackside and on-board ERTMS solutions”.

The Amsterdam metro network consists of more than 40 km of track and 58 stations. With the installation of Alstom’s CBTC technology, all communication to trains will be done via redundant radio and backbone network, so making the system more reliable and facilitating maintenance. Using radio transmission also avoids disturbing the existing track-based system during the re-signalling. The CBTC system will be implemented first on the “Ringlijn” (Ring Line, or line 50, which connects Amsterdam Zuidoost to the west without crossing the city centre) by April 2015. Full CBTC will be in operation on the complete network in 2017. In February 2010, the city of Amsterdam placed a €200 million order with Alstom Transport for 23 Metropolis metro trainsets, which are currently being delivered to enter commercial service in the autumn.