Over the next five years, Adelaide, South Australia will begin to test the limits and opportunities of driverless technology… 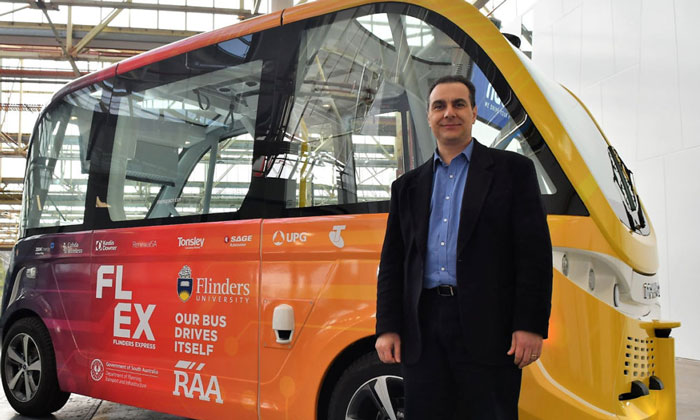 The five-year Flinders University trial is the first time autonomous buses have operated on public roads in South Australia.

The Flinders Express (FLEX) will initially provide first- and last-mile shuttle services between the nearby Clovelly Park train station and Tonsley’s Main Assembly Building, followed by connections to bus stops on the South Road artery and businesses in the Tonsley precinct.

The Tonsley Innovation District has been transformed into Australia’s first innovation precinct and hub for advanced manufacturing.

FLEX, the French-designed Navya Arma electric shuttle, can carry up to 15 passengers at a speed limited to 30km/h during the trial. Managed by an on-board chaperone, users will be informed of the technology and safety assurances.

Funded by the State Government and industry partners, within one year the shuttle will run to the nearby Flinders Medical Centre and the university’s Bedford Park campus before using main roads around the entire Bedford Park precinct.

Flinders University Head of Civil Engineering, Professor Rocco Zito, said demonstrations and trials of driverless vehicles that involved the community were a good way of building acceptance of the new technology. “Our aim is not to prove the technology but rather expose the public to this new type of transport service and learn from their responses and reactions to help driverless vehicles gain general acceptance.”

Zito continued: “In order for driverless vehicles to become an integral part of our transport system we need to trial these vehicles in real operating conditions and encourage public participation and feedback. It’s not a question of if this technology will be on roads, but when.”

The vehicle will be docked within a six bay solar recharge garage soon to be built. The free solar garage will also be available to the public who need to recharge their own electric vehicles.

Keolis Downer CEO, David Franks, said autonomous shuttles would change the way people travelled. “By exploring how these vehicles can complement existing transport solutions, we aim to encourage the use of public transport and create more liveable and sustainable environments for communities.”