Tyne and Wear Metro has joined a number of rail and light-rail service operators in the UK in equipping some of its staff with body cameras to improve safety and curb anti-social behaviour, following a successful trial in 2017… 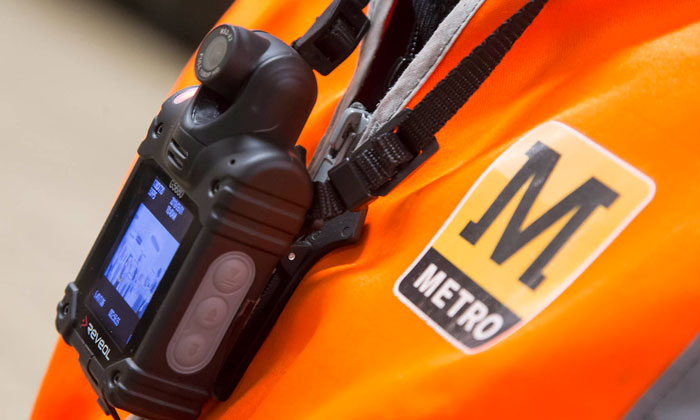 Customer service advisors working for Tyne and Wear Metro are being issued with body cameras as part of an initiative to deter anti-social behaviour and improve safety.

Nexus, the public body which owns and manages the metro, began trialling the technology in 2017 and is now rolling it out on a permanent basis, stepping up its campaign to reduce fare evasion and what it calls ‘low-level disorder’.

The digital cameras are clipped onto the lapel of staff members’ jackets, and have so far been given to customer service advisors on duty across the metro system and local bus stations. Each camera is clearly marked on staff uniforms to let people know that they are being filmed.

“These new cameras will help to deter anti-social behaviour on our network and give reassurance to law abiding customers.,” said Chris Carson, Metro Services Director. “It will make people think twice about challenging members of staff who are just doing their jobs. Footage can be passed to the police for them to use as evidence. The images are captured digitally, so the footage is crystal clear.”

The initiative has come into place in spite of crime rates on the metro network staying low, but Carson says that the cameras are a “new tool” in the fight against anti-social behaviour and ticketless travel.

Meanwhile, Metro Neighbourhood Policing Team Sergeant, Tim Hand of Northumbria Police said: “The introduction of body cameras for frontline Nexus staff will really help us when tackling issues of anti-social behaviour on public transport and around the stations. The fact that our officers can easily access video footage will be a massive advantage to us when it comes to providing clear evidence for convictions.”

Workers activate the recordings at the touch of a button, and the footage can be accessed by Northumbria Police and the British Transport Police to support prosecutions. However, staff will only turn on the cameras to record when they believe that doing so could help prevent or document incident. The public will know that the cameras are recording when a red light is visible on the device.

Inspector Brian Buddo from the British Transport Police, said: “Our research has showed that not only do body-worn cameras provide vital evidence in cases and speed up the justice process for victims, but they also protect rail staff and officers from malicious complaints and will reassure the public as they travel on the Metro system. The cameras will also help Nexus staff in some of the challenging situations they face as the presence of a camera can often help diffuse escalating incidents.”