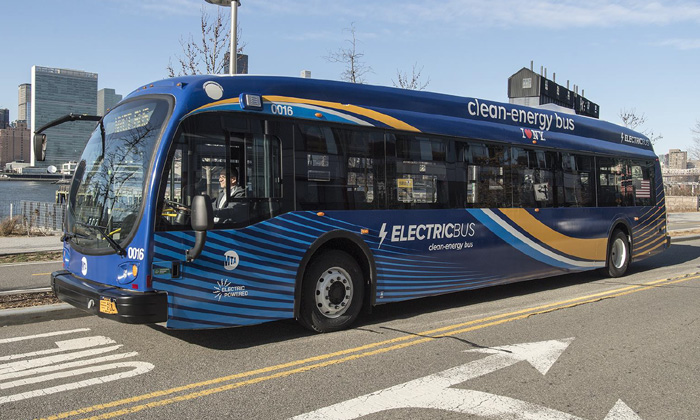 The Metropolitan Transportation Authority (MTA) is to test 10 new buses by Proterra and New Flyer with the intention of ordering 60 all-electric buses.

Governor of New York Andrew Cuomo declared the start of a three year pilot program for 10 all-electric buses with the aim to modernise the MTA’s bus fleet. The pilot follows the successful completion of study on the best practice in the electric bus market.

The new zero-emission, all-electric buses support environmental sustainability and are quieter than traditional buses but still supply the luxury comforts for the passenger, such as Wi-Fi and USB ports.

“As we reimagine the MTA, we have an opportunity to not only modernise our bus fleet but to also reduce emissions that impact the environment and public health,” said Cuomo. “This new program helps the MTA secure a cleaner and greener future while leveraging the latest in innovative advancements to push New York’s transit systems into the future.”

In addition to testing the new electric buses, the MTA has ordered 110 new compressed natural gas buses to operate across the Bronx and Brooklyn between now and the first quarter of 2019. The new buses will be the first CNG 60-foot articulated buses and will refresh a portion of the existing fleet, taking the oldest buses out of service and increasing the capacity. CNG buses are cleaner and have lower particulate emissions than diesel buses.

“As a hub of business and transportation, New York City is an ideal proving ground for both electric buses and the charging technology,” said MTA Chairman, Joseph J. Lhota. “As we continue to modernize our public transit system, the MTA looks toward a more sustainable future by continuing to reduce greenhouse gas emissions and innovating in all of our operations.”

The MTA used a four-year study of best practices for electric buses from systems across the US and around the world to identify the two vendors selected to manufacture the 10 all-electric buses.

The three-year lease for the Proterra buses includes six depot charging stations, which will be installed in the Grand Avenue Depot in Maspeth, Queens. One ‘en-route’ high power charging station will also be included and located at Williamsburg Bridge Plaza in Brooklyn, used to extend the range of the buses without having to return to the depot.

The three-year lease for the New Flyer buses includes two depot charging stations, which will be installed in the Michael J Quill depot, Manhattan. Two ‘en-route’ high power charging stations, one on East 41 Street and the second at Pier 83, Circle Line on West 43 Street will also be included. The MTA plans to learn if these two ‘en-route’ chargers can eventually support 24 hours of operation without having to return buses to the depot.

The pilot program is intended to provide the MTA and manufacturers of electric buses with actionable data on what works best in New York’s metropolitan environment. The MTA will use the results from the pilot to refine and develop bus specifications for future electric bus procurements to ensure buses are fully able to meet the rigors of operating in New York City.