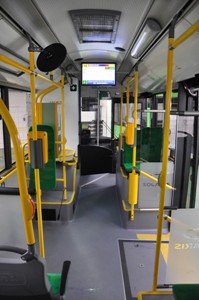 Poznań City Transport ordered 26 Solaris Alpino 8.6 low-floor midibuses from leading bus builder Solaris Bus & Coach. The first twelve already run in the western Polish city, with the remainder to follow by the end of April 2012. The manoeuvrable small buses are part of the operator’s fleet renewal programme. During the day, they are used to connect housing estates, while at night they provide essential direct links between outer boroughs.

The Solaris Alpino 8.6 is the smallest member of the Solaris family. Just 8.6 metres long and 2.4 metres wide, it has a fully low floor throughout. Extremely agile, it is ideal for narrow roads. Despite its small size, the Alpino is a big bus at heart: it has been derived from the modular concept of the wider Urbino family. As specified by Poznań City Transport, it offers room for 50 passengers, 13 of which will be seated. Its premium specification includes air-conditioning, a self-service ticket vending machine and a comprehensive passenger information system with visual display and acoustic announcements. Its 6.7-litre Cummins diesel engine produces 181 kW (242 PS) and meets the demanding EEV emissions standard.

Poznań will be one of the host cities of the 2012 European Football Championships. In preparation for this, Poznań City Transport has taken delivery of 100 Solaris city buses over the last two years, split between the Urbino 12 and Urbino 18 models. Currently, they are being joined by 45 Solaris Tramino low-floor trams. As the city looks forward to hosting its international guests, this is reflected in the interior of the new Solaris buses and trams, which have footballs and other symbols of Poznań woven into the moquette of all seats.

Solaris CEO Solange Olszewska welcomes the arrival of the new Solaris Alpino buses: “We delivered the first buses to Poznań City Transport as many as 15 years ago. Since then, this has become a valuable partnership and we are delighted to continue this successful co-operation with the delivery of these versatile Solaris Alpino midibuses.”