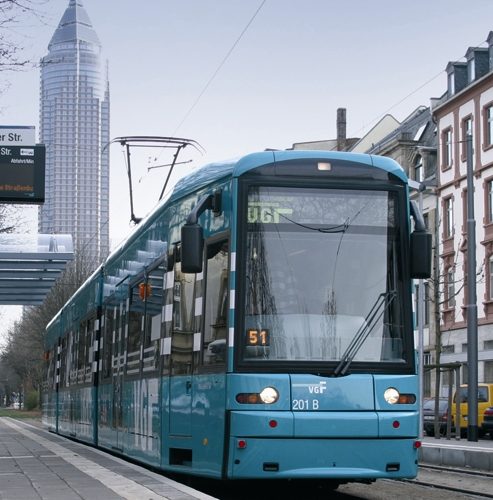 Bombardier Transportation has won an order to supply an additional 78 BOMBARDIER FLEXITY Swift high-floor light rail vehicles (LRVs) and 10 FLEXITY Classic trams to the Frankfurt Transport Authority, VGF in Germany. The new LRVs are scheduled to be delivered between January 2014 and June 2017; the new trams will arrive in Frankfurt/Main between August and December 2012. The orders, which are options under two contracts signed with VGF in March 2006 and June 2002, are valued at approximately 169 million euro ($219 million US) and about 23 million euro ($29 million US). 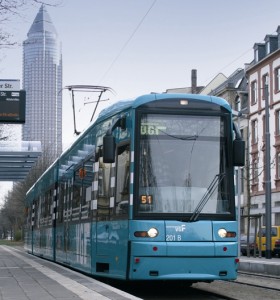 The new LRVs mark a further step in Bombardier’s commitment to increased passenger comfort and operational flexibility, offering a novel mass transit experience at peak times in the German finance hub. The 25 m long vehicles are designed so that they can be combined into 50 m long units, with passengers able to walk from one end all the way to the other. The first two vehicles capable of being combined into one long unit have already been delivered for testing and are due to begin operating in February 2012.

“Our significant investment in these new vehicles supplied by Bombardier is absolutely essential,” said Michael Budig, Managing Director of VGF. “It enables us to offer our passengers a metro and tram operation of the highest standard, one that meets the requirements of VGF and the city of Frankfurt.”

This is the fourth order which VGF has placed with Bombardier Transportation, bringing the total number of vehicles ordered to date to 299. Following an order for 60 FLEXITY Classic trams in December 2001 and an additional five vehicles in January 2005, 146 FLEXITY Swift high-floor LRVs were ordered in March 2006.

“This fourth order demonstrates VGF’s trust in our business as well as in our FLEXITY vehicles and continues our long-standing and successful partnership,” said Germar Wacker, President, Light Rail Vehicles, Bombardier Transportation. “The availability of our products, Bombardier’s know-how and VGF’s positive experience with our FLEXITY vehicles offer the ideal basis for these new trams and LRVs to demonstrate their reliability and efficiency in Frankfurt.”

The FLEXITY Classic trams have proven their reliability on the Frankfurt tram network since 2003. The trams are 30 m long and 2.4 m wide. Conventional wheel-set bogies ensure a smooth ride and reduce the wear and tear of wheels and tracks. With a capacity for 179 passengers the vehicle is ideally suited to the city.

Bombardier offers the industry’s most complete portfolio of light rail solutions with a strong reputation for performance and reliability. To date, more than 3,500 Bombardier trams and LRVs are in revenue service or on order in approximately 100 cities across Europe, Australia and North America.