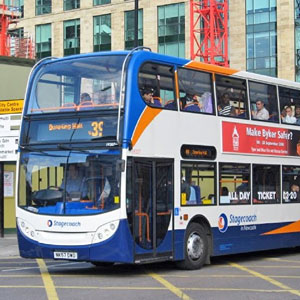 The Perth-based transport company, which has invested heavily in state-of-the-art hybrid electric buses and launched innovative projects such as Britain’s first BioBuses and vehicles running on biomethane made from household waste, was among the winners at the 2011 Low Carbon Champion Awards held in London.

Stagecoach was recognised for its continuing commitment to operating greener vehicles. The company impressed judges after reducing the carbon footprint of its buses over the past two years through the use of cleaner fuels, investment in new technology and the introduction of eco-driving techniques across its UK bus operations.

Stagecoach Group Chief Executive Sir Brian Souter said: “We’re delighted to have won this latest green award, which recognises the hard work of our employees in reducing the impact of our operations on the environment.

“As well as looking at new and innovative ways to make our fleet even greener, we believe it’s important to help people reduce their own carbon footprint by offering good value, greener, smarter transport and raising awareness of more sustainable ways of living and doing business.”

The Low Carbon Champions Awards are run by the Low Carbon Vehicle Partnership (LowCVP), a public-private partnership that exists to accelerate a sustainable shift to lower carbon vehicles and fuels and create opportunities for UK businesses. The awards recognise best practice in key areas from vehicle manufacturing and fleet operation to the development of products and services that reduce greenhouse gases from road transport operations.

Last month, Stagecoach – along with Alexander Dennis Ltd – won the Green Award at the 2011 Route One Operator Excellence Awards for the introduction of hybrid-electric vehicles. The Group also won the Travel and Transport Award at the 2010 Green Business Awards and, in July this year, Stagecoach was Highly Commended as Company of the Year at the inaugural BusinessGreen Leaders Awards.

Stagecoach has a comprehensive sustainability strategy and is investing £11million in a range of measures to meet its environmental targets. The Group is targeting an overall reduction of 8% in buildings CO2 emissions and a cut of 3% in annual fleet transport CO2e emissions by 2014.

Last year, Stagecoach Group was awarded the prestigious Carbon Trust Standard after taking action on climate change by measuring and reducing its carbon emissions. Stagecoach is the first Scottish-based transport group – and one of only two listed UK public transport operators – to have achieved the stretching carbon reduction benchmark. It covers all of the Group’s bus and rail operations in the UK.

The Group’s UK Bus division has launched a number of initiatives in the past 12 months alone to improve the environmental performance of its 8,100-vehicle bus fleet and associated depots, including: