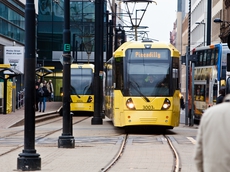 The European Investment Bank, the European Union’s long-term lending institution, has agreed to provide GBP 500 million for the expansion of Greater Manchester’s Metrolink network. The long-term funding, over 30 years, will be used by the Greater Manchester Combined Authority to fund construction of the third phase of the light rail system. This will finance new trams and additional infrastructure, and represents over a third of the overall investment costs. The initiative is part of the European Investment Bank’s engagement to support sustainable public transport in leading European cities and to reduce reliance on private car use.

“Extension of Greater Manchester’s Metrolink network will transform tram links across the conurbation. The European Investment Bank is committed to supporting sustainable transport and successful completion of the project will improve the lives of Greater Manchester’s residents for years to some.” said Simon Brooks, European Investment Bank Vice President responsible for the United Kingdom.

Councillor Andrew Fender, Chair of the Transport for Greater Manchester Committee, which is overseeing the investment on behalf of the GMCA, said: “The Metrolink expansion is the single largest investment in public transport in the UK, outside of London. It will deliver a legacy for Greater Manchester that will regenerate and transform key district centres and provide new connections to the labour market for businesses. As such, it will play a vital role in keeping the region’s economy growing now and long into the future. I’m pleased that we’ve been able to work with the European Investment Bank to realise this ambitious vision on a sound financial footing and I look forward to seeing the network grow and spread to new destinations, across the region, in the coming years.”

Manchester Metrolink Phase 3 will deliver a network three times the size than it is now, covering a total of 97km of track, with 99 stops and served by a fleet of 94 trams. Metrolink passengers will benefit from frequent and high quality transport links across the second largest conurbation in the UK, via new lines to Oldham and Rochdale town centres, Ashton-under-Lyne in Tameside, East Didsbury, and Manchester Airport, via Wythenshawe. A second, additional line across Manchester city centre is also being developed. The expansion as a whole is due to be completed in 2016.

European Investment Bank financial support for Metrolink will lower the overall cost of the project through cheaper financing costs, fixed interest rates and diversification of finance.