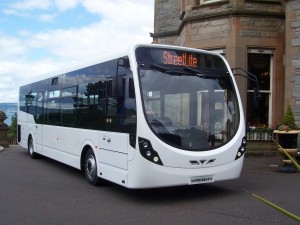 Designing in comfort and safety features for its customers is a priority for Wrightbus. Seatbelts have been proven to significantly reduce the likelihood of serious injury in the event of a collision and passenger safety is paramount in the minds of operators.

With a host of recent orders, both via distribution partner Mistral Bus and Coach and direct sales to operating groups, Wrightbus is on course to achieve a milestone – that of having 20 StreetLite® customers in the UK.

More than 50 Wrightbus integral midi buses are already in daily operation throughout the UK and following successful demonstrations orders have been taken from operators, both large and small. The Ballymena-based company is set to achieve the milestone of 100 sold before the end of the year, underlining its market-penetration from a standing start when first deliveries commenced a year ago. Specific order details will be released in due course.

Wrightbus showcased the first “door forward” versions of the StreetLite® to trade press in Northern Ireland in July of this year. Coach & Bus Live provides an arena for the vehicles first public display. Orders for the door forward (d/f) variants are already in double figures with production well underway.

The “wheel forward” (w/f) variant also continues to prove its pedigree with orders now received from major groups such as Go Ahead Group which have ordered 9 of the 8.8m variant, Reading Buses taking 6 of the 9.5m variant and others to be announced shortly.

“It’s a very encouraging picture,” enthused Sam McLaren – Wrightbus Commercial Director, “With well-received products and a healthy order bank, we now have a full production line dedicated only to the StreetLite ® and a specific team of 75 shop floor workers committed to ensuring delivery schedules are maintained and quality targets are consistently achieved.”

For further details on the new Wrightbus StreetLite® and the full story behind its design and development, visit www.wright-bus.com/streetlite