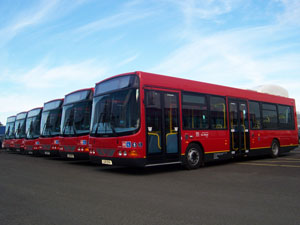 The 10m single decks, destined for service in London, are the first brand new vehicles to benefit from the latest level of hybrid technology – they join six existing single deck buses recently retrofitted with the refined package and already in successful operation with Go Ahead Group on Route 360.

Hybrid technology has been at the core of the company’s product development programme for the best part of a decade now and hybrid electric powered Wrightbus single deck buses have been in operation in London since 2006. More recently, HEV (Hybrid Electric Vehicle) versions of both Double Deck and StreetCar® models have joined the model line up, with this environmentally-friendly and highly fuel efficient form of propulsion now also an integral part of the StreetLite® midi and New Bus for London product programmes.

Group Director Dr William Wright CBE said, “Test results on the new driveline are extremely encouraging, delivering both increased reliability and fuel economy. By settling on a hybrid package which can be effectively deployed across our entire model range, we are now even better able to consolidate our knowledge and experience gained to date.

He added, “I have long been an advocate of electric drive technology for buses and as pioneers in the UK & Ireland we have learned a lot from our development work in this field. We look forward to being able share the benefits of our on-going investment in hybrid technology with new and old customers alike.”