Posted: 10 June 2011 | Transport for Greater Manchester | No comments yet 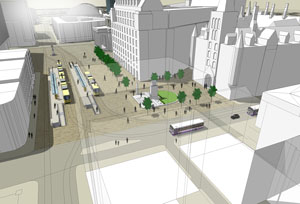 Transport for Greater Manchester (TfGM) has launched a public consultation on proposals for a new tram line, which will provide passengers with a second city centre Metrolink crossing, a vital element of the current Metrolink expansion.

Manchester City Council, as planning authority, is also inviting views on related proposals to sensitively relocate the Cenotaph within St Peter’s Square to provide a location better suited to quiet contemplation and with fewer space constraints for memorial events.

The proposed line will run from the Deansgate-Castlefield stop, through St Peter’s Square, along Princess Street, Cross Street and Corporation Street to re-join the existing Metrolink line just outside Victoria Station.

TfGM’s Metrolink Director, Philip Purdy, said: “A second city crossing will play a vital role in helping to build a strong and prosperous economy for Manchester, providing the necessary capacity, flexibility and reliability for the future tram network to operate.

“The current Metrolink extensions and service enhancements programme mean that, by 2021, the number of people accessing Manchester city centre by tram is set to treble.

“Given how important this development is for the city, I hope as many people as possible take the time to look at the proposals for the second city crossing and let us know what they think.”

Under the proposals there will be a new, larger tram stop at St Peter’s Square, which is expected to be the busiest stop on the network, as well as a new stop at Exchange Square and enhancements to Metrolink facilities at Victoria Station.

“The second city crossing is at the heart of the £1.4 billion expansion of the Metrolink network and is fundamental to its success.”

Sir Richard Leese, leader of Manchester City Council, said: “Proposals to sensitively relocate the Cenotaph within St Peter’s Square have only been brought forward after careful consideration with veterans’ groups, church authorities and other relevant parties.

“There was strong consensus that the current site is not ideal and that we have a real opportunity to improve on its setting as part of wider improvements to St Peter’s Square. But we recognise that this is an important issue for many people in the city which is why we are embarking on further consultation before any decision is taken.”

Transport for Greater Manchester will host a number of exhibitions to provide people with an opportunity to find out more about the second city crossing proposals. The events will be held as follows:

Transport for Greater Manchester would like to hear your views on the Metrolink second city crossing by 9 September 2011, when the public consultation will close.

If you would like to take part in the consultation you should complete and return the response form in the consultation brochure, which is available from Travelshops in Piccadilly Gardens and Shudehill Interchange, at the public exhibitions and online at www.tfgm.com/haveyoursay. You can also email [email protected] with your comments.

More information on the proposals are available at www.tfgm.com/Metrolink2cc. Alternatively you can call the Metrolink team on 0161 244 1444, email [email protected] or write to Transport for Greater Manchester, Metrolink Second City Crossing, FREEPOST RRHE-RRKUU-KSJY, Manchester, M1 3BG.