FirstGroup, the UK’s largest bus and rail operator, today revealed that its bus division is to order £160m of new vehicles over the next two years from UK bus manufacturers. The order for 955 vehicles is one of the largest the British bus industry has ever seen. 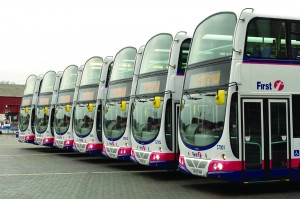 The order, spread over two years, includes 200 buses to transport people to London for the 2012 Olympic Games.

The announcement has been described by the Secretary of State for Scotland, Michael Moore, as: “…great news for the UK’s bus industry and a vote of confidence in Scotland’s manufacturing sector.”

First, which operates 8,000 buses in more than 40 major towns and cities in Britain, also revealed the results of a new poll which suggests that the British public are ready to rely less on the car and convert to public transport in the wake of rising fuel costs.

With the average litre of petrol now costing 131.9p, many motorists are unable to afford to fill up their tank – 24% only fill half a tank and 17% fill a quarter due to the cost. 39% of Brits admit that they are shocked by how much it costs to fill up their tank and one in three (36%) admit they are using the car less in an attempt to reduce their fuel bill.

“Our bus order is good news for customers, good news for British industry and in particular the transport sector,” said Giles Fearnley, Managing Director of First UK Bus. “Over the next two years we will roll out more than 950 brand new buses across Britain.”

He continued: “The effect of our £160m investment will help safeguard and create jobs in the UK. It demonstrates our confidence in the marketplace and reinforces our commitment to provide high quality services to our customers.”

Speaking about the results of the poll, Fearnley added: “Summer 2008 was the last time we saw fuel prices at the kind of levels they are today – at that time we noticed an increase in passenger numbers.

“The results of the survey indicates that high prices at the petrol pump are persuading more people to look at public transport alternatives. I’m sure our brand new buses will help persuade those considering relying less on their cars that the bus is a reliable, convenient, comfortable and cost effective alternative.”

He added: “Our order includes 40 hybrid buses, which we are now introducing into Leeds and elsewhere and is a positive contribution to significantly lower emissions.”

As a result of the order for 955 buses, First will invest in the region of a further £4m over two years to refurbish and ‘cascade’ buses to other parts of its business, thus improving the quality of its vehicles throughout the UK.

UK manufacturers, Wrightbus (based in Ballymena, Northern Ireland) and Alexander Dennis (based in Falkirk) and have been awarded the contracts to build the buses.

Wright Group Managing Director, Mark Nodder, said: “We are very pleased to again feature so prominently in First’s vehicle investment plans. In conjunction with our strategic partner Volvo Bus, we have continued to work very closely with First to develop a very strong product and support proposition, which is reflected in the share of the business that we have won. Importantly too, it is also more good news for all our workforce at Ballymena.”

Steve Dewhurst, Managing Director of Volvo Bus UK and Ireland, added: “I am particularly pleased that the Hybrid orders follows on from a successful demonstration in Leeds where the product surpassed expectations on fuel savings, and proves the value of the Volvo Parallel Hybrid system in all types of routes.”

Colin Robertson, Chief Executive of Alexander Dennis Limited, said: “We are delighted to be continuing our long-standing association with FirstGroup. Its order comes at a time when market demand in the UK remains 20% down on last year. As a result, its commitment to a total of 955 buses over two years is a shot-in-the-arm for the bus manufacturing sector and for our factories in Falkirk, Guildford and Scarborough.

“At a time when oil prices are at an all-time high it is clear that our market-leading, hugely fuel efficient midi, single, double deck and hybrid buses, provide a significant bonus factor for operators – large and small – who are bidding to optimise running costs.”

The Secretary of State for Scotland, Michael Moore, said: “I welcome FirstGroup’s continued commitment to investment in public transport that will secure continued employment for the workers in Alexander Dennis’ Falkirk factory. I’m delighted that FirstGroup is using the coalition government’s Green Bus Fund which awarded £15m in 2010 to support the manufacturing of low carbon buses in the UK.”