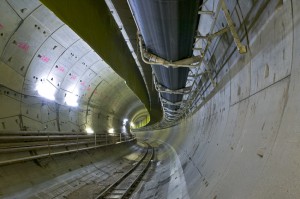 The contract, awarded by Romania’s national metro company – Metrorex, includes civil engineering work to build the 6.1 kilometres of the new underground line, which will include nine stations. The project also involves work on the surface to restore the roads affected by the construction project. Work is scheduled to begin in the second half of 2011 and will take at most 25 months.

The route includes two parallel 5.7 metre diameter tunnels measuring 4.85 km each, and a third tunnel measuring 260 metres linking lines 1 and 5 at Eroilor station. A total of 240,000 m3 of earth and rock will need to be excavated. The nine stations will be located between 15 and 20 metres below ground level.

Other bidders included a Turkish-Russian-Italian consortium (Dogus, Gulermak, Moskovsky Metrostroy and Salini) and an Austrian-Romanian group (Strabag and Straco Grup). The European Investment Bank (EIB) and the Romanian government will finance the construction project.

FCC operating in Romania since 2004

Romania is not a new market for FCC. In fact, the Company has been working there since 2004. FCC has participated in a number of projects to upgrade highways and viaducts. It employs over 500 people in Romania.

Its main projects currently under way in Romania include the Basarab viaduct in Bucharest (114 million euro); the Bucharest north bypass, which includes building a bridge over the railway line at Otopeni; the Constanza bypass (119 million euro); and the Arad-Timisoara-Lugoj section of the DNC1 motorway.

FCC Construction has extensive experience in building railways and metros. Outside Spain, the Company participated in the construction of the Lisbon Metro (Alameda-Expo section) and in the extension of line 2 of Athens Metro, as well as the construction of new stations there (Periteri and Anthoupoli). Through its subsidiary Alpine, FCC is currently building the metro line between New Delhi and Indira Gandhi International Airport and two new sections of the Singapore Metro.

FCC was recently awarded the contract to build the Toronto-York Spadina Subway Extension (TYSSE) in Canada, which includes construction of the North tunnels and the Highway 407 Station and is worth 304 million euro, and line 1 of the Panama City Metro (14 stations), worth 1 billion euro. In December, Alpine obtained a contract from Crossrail to build tunnels in London’s Liverpool Street and Whitechapel station for 250 million pounds (around 295 million euro).

FCC operates in 54 countries. This new project is another step forward in FCC’s global expansion aim of securing over 65% of its revenues from market outside Spain. Foreign revenues currently account for 46%.