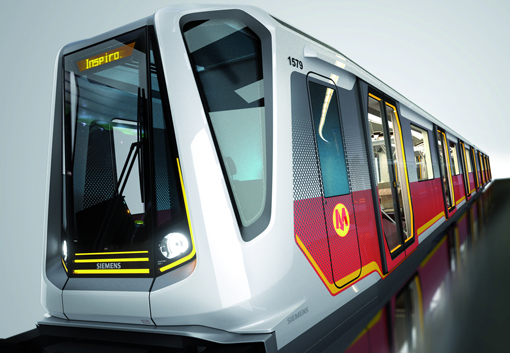 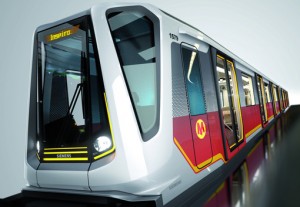 This is the biggest order ever for Siemens in Poland. It is also the first order for complete units of the new “Inspiro” metro generation recently unveiled at InnoTrans, the world’s biggest trade fair for transport technology. These trains are intended for operation on the Warsaw Metro system; delivery is due to start in autumn 2012.“Once again, our ambitions in the rapidly growing market for metro systems have been crowned with success. Inspiro is the result of our efforts in the past years to come up with an innovative and eco-friendly solution to city’s increasing mass transit, said Hans-Jörg Grundmann, CEO of the Mobility Division of Siemens.

.Warsaw already has one underground line, which is approximately 23 kilometers long and serves 21 stations. The central section of the new Line 2 is currently under construction. The 35 trains just ordered are to be used on both these lines and are Warsaw Metro’s answer to the ever-increasing number of passengers. Between 1998 and 2008 alone, ridership tripled annually to a figure well over 126 million passengers. 15 trains will be used on the first metro line and 20 trains are ordered for the new constructed line. An option for the further extension of Line 2 allows for the call-off of 17 more trains of the same type within the next three years. The present order calls for the delivery, commissioning, testing and certification of the trains. The first ten units will be completely built at the Siemens Mobility plant in Vienna, Austria. Partly assembling of the remaining metro trains will be carried out by the partner company Newag in Nowy Sącz, Poland.

With its 1.7 million inhabitants Warsaw is representative for many fast growing cities in Eastern Europe. Analysts forecast an above-average trend for the market there because existing metro fleets are due for modernization. UNIFE, the Association of the European Rail Industry, foresees an annual growth rate of 4 percent for the worldwide metro market by the year 2016, with a current volume of about EUR5 billion for rolling stock and another good EUR 2 billion for rail infrastructure. This growth will be fueled, above all, by the rising populations in the major urban centers in Eastern Europe.

The metro train made by Siemens and marketed under the name “Inspiro” makes consistent use of lightweight construction methods and modern propulsion technology to achieve a marked decrease in the consumption of energy. When it came to selecting materials – for the car body and for the interior – Siemens placed great importance on reusability. The recycling rate exceeds 95 percent. This new metro generation is part of Siemens’ green portfolio that generated about EUR28 billion in sales for the company in fiscal 2010, making Siemens the world’s biggest supplier of eco-friendly rail technology. These kinds of products and solutions enabled our customers to save 270 million metric tons of carbon dioxide (CO2) during that same period, which is equal to the aggregate CO2 output of Hong Kong, London, New York, Tokyo, Delhi and Singapore.

This new rolling stock generation is setting standards not only in environmental protection, but also in terms of operating costs. Maintenance intervals have been extended considerably, thereby lowering the cost of routine servicing while increasing the availability of the trains. Consequently, the metro operator is able to achieve a higher system capacity with the same number of cars. The flexible seating arrangements, the optional use of driver assistance systems, and the possibility of driverless operation ensure that the operator gets the utmost capacity out of his system. The trains can run at a top speed of 90 km/h. The modular, self-contained train concept allows the formation of two to eight-car configurations with varying degrees of motorization. Passenger interchange times have been greatly reduced thanks to the use of maximum door widths and load detection systems. And, for example, since it has been possible to eliminate technical equipment cabinets inside the cars, the interior design can focus on offering full comfort and convenience to the passenger.

These metro trains will also give Warsaw a completely new look. The exterior design created in cooperation with DesignworksUSA, a subsidiary of the BMW Group, is sure to set the modern tone. The combination of futuristic design of the front end and graphics styling of the sidewalls of the “Inspiro” symbolizes the forward-looking attitude of present-day Warsaw. A bright, open-plan interior highlights the modern chic and appeal of the city’s metro. Together with the end-to-end accessibility of the train, the interior design contributes extensively to enhancing the passenger’s sense of security.