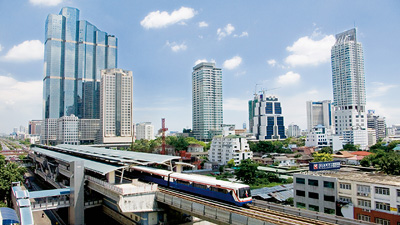 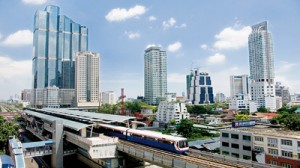 Train service on the Sukhumvit Line is to start gradually from the end of 2012. In addition, the 5.25-kilometer extension of this line is to be electrified by Siemens under the terms of an order placed by Italian-Thai Development Public Company Limited (ITD), Thailand’s biggest building contractor. “From metro to elevated railway to airport link, Bangkok is a showcase for our innovative, integrated transportation concepts aimed at solving the mobility problems of the world’s rapidly growing urban centers,” said Hans-Joerg Grundmann, CEO of Siemens Mobility.

The elevated BTS Skytrain was the first rapid transit system to be built in the capital of Thailand and, since its opening in 1999, has had a major hand in reducing the flow of automobiles in the city. Whereas traffic barely makes any headway on the congested streets, the Skytrain units built by Siemens can move at speeds of up to 80 kilometers an hour on a clear track 12 to 30 meters above the pavement. The rapid transit system consists of the two Sukhumvit and Silom Lines, a total of 25 stations and approximately 28 kilometers of track.

The newly ordered trailer cars are to be put into service successively on the Sukhumvit Line as of the end of 2012 and lengthen the trains already in operation from 3-car to 4-car multiple units. This increase in capacity is necessary in order to cope with the dramatic rise in ridership. Currently, the BTS system transports about 460,000 people per day on the Sukhumvit Line. Each car has 4seats and standing room for 240 persons. The 750 V DC power supply comes from the conductor rail. The trailer cars are to be pre-assembled at the Siemens plant in Vienna, Austria and undergo final assembly in Bangkok. The delivery of these cars is to continue into 2013.

The City of Bangkok is not only investing in the availability of existing lines but is also planning to expand its transit network. For the planned 5.25-kilometer extension of the double-track Sukhumvit Line to the east, Siemens is providing the complete power supply for DC and AC operation. The electrification package includes the power supply systems for train traction and the 7 connected stations. In this case, Siemens is acting as a subcontractor to Italian-Thai Development Public Company Limited (ITD). The project must be realized in record time and completed by not later than August 12, 2011, i.e. just in time for the Queen of Thailand’s birthday.

Siemens Mobility has played a decisive role in building up public railway transportation in Bangkok. Within ten years, the company has been able to hand three turnkey rail-based systems over to the city: they include the initial rapid transit system in 1999, the first metro line that followed in 2004, and the Airport Rail Link, which since the summer of 2010 has been taking passengers from the city center to Suvarnabhumi Airport in only 15 minutes. A baggage handling system developed by Siemens is also being used on the airport connection. It offers air passengers the convenience of being able to check in at the City Airport Terminal in downtown Bangkok and having their baggage loaded onto the train and transferred to the baggage handling system at the airport – completely automatically.