The self-driving shuttle suffered an unfortunate accident chalked up to human error just two hours after launch, but went on to complete its route regardless… 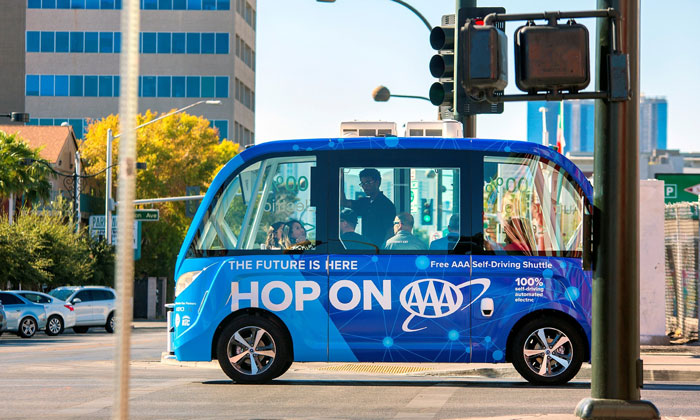 AAA in partnership with Keolis, launched the largest self-driving shuttle pilot project in the United States to operate in live traffic on 8 November.

Over the course of a year, the self-driving shuttle aims to provide a quarter of a million residents and visitors of Las Vegas with first-hand experience using autonomous vehicle (AV) technology.

Building on Keolis’ limited shuttle launch in downtown Las Vegas in early 2017, the shuttle is the country’s first autonomous shuttle to be fully integrated with smart-city infrastructure, communicating with traffic signals to improve safety and traffic flow.

The NAVYA shuttle comes equipped with LiDAR technology, GPS, cameras, and will seat eight passengers with seatbelts. Safety features include the ability to automatically and immediately brake in the event of a pedestrian crossing in the path of the vehicle.

The AAA will study how the shuttle interacts in a live traffic environment in downtown Las Vegas’ busy Innovation District, and survey riders on their experience in order to understand why a large percentage of consumers remain wary of driverless technology, and whether a personal experience changes their perception.

In addition to this, they will examine how others sharing the streets react to it – including pedestrians and cyclists.

Las Vegas was chosen for the launch because of the state’s progressive regulations on autonomous vehicles, heavy investment in innovation, the high volume of visitors and its favourable climate for testing new driving technology.

Covering a 0.6-mile loop in the Fremont East Innovation District of downtown Las Vegas, the shuttle can be boarded at any of the autonomous vehicle shuttle’s three stops located on Fremont Street and Carson Street between Las Vegas Boulevard and 8th Street.

Less than two hours after its official unveiling and launch, however, the self-driving shuttle was involved in a crash. The accident has been chalked up to human error, with a lorry having reversed into the shuttle, hitting its front bumper.

Sensing the lorry’s approach, the shuttle ceased operation, but unaware of the its presence, the lorry’s driver continued driving. It is understood, however, that there were no injuries and no visible damage caused to the shuttle. Following the collision, the shuttle went on to complete its route circuit a further two times.