Newtecnic has been appointed by BACS Consortium to oversee the construction stage of the advanced and highly complex facade envelope of the King Abdullah Financial District (KAFD) Metro hub in Saudi Arabia. 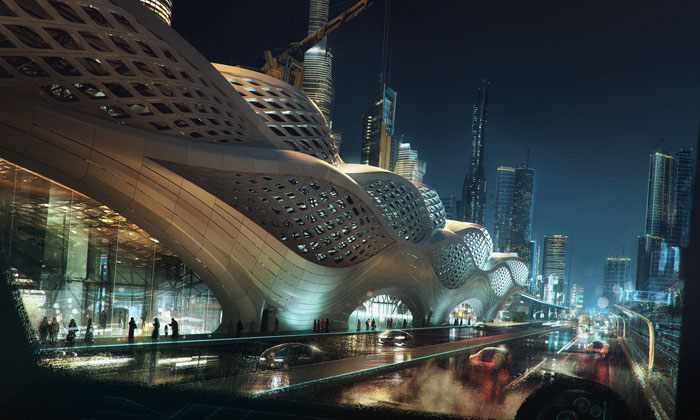 Planned to deal with Riyadh’s expected 50% growth over the coming years, KAFD is part of a new citywide transport system comprising six metro lines, 85 stations and more than 100 miles of track. The project will be completed in 2018.

Complexity is produced by the continuity of KAFD’s self-supporting, 200-meter-long, high-performance concrete-composite walls and roof. To produce the structure new adjustable building components and fixing methods had to be invented, developed and tested by Newtecnic in partnership with the Engineering Department of Cambridge University.

By going back to first principles all excess and waste have been removed to substantially reduce the overall cost of the building. This facilitates the spectacular structure being delivered for the price of an ordinary one and ensures that it will last twice as long.

The KAFD hub extends beyond simple station typology emphasising the building’s importance as a dynamic and dramatic multi-functional public city space. Efficiency of pedestrian routes and connectivity are the basis of the internal design and this architectural concept extends to the building’s envelope.

“This appointment means the bold aesthetic and technical vision, that we helped through the competition and design stages, can be brought to life retaining the original design intent,” commented Andrew Watts, founder of Newtecnic.

“In our new role, we will examine and approve the work of several contractors ensuring the project is completed efficiently and accurately and that all building components and fabrications are quality assured before they are used.”

To achieve this, Newtecnic deploys technology that reduces fragmentation, unifies documentation and safely speeds up design and construction by introducing concurrent and collaborative working methods.

Andrew Watts concluded, “It is very unusual to appoint building engineers to this role but our long-term project commitment and innovative design engineering input have been recognised and rewarded. We are thrilled to be given responsibility for the successful final delivery of this amazing architectural and engineering accomplishment.”

How China sped ahead of Europe in electric vehicles