Ten Solaris Urbino 8,9 LE electric buses are to join the municipal fleet of Stalowa Wola in the Podkarpackie region of Poland. 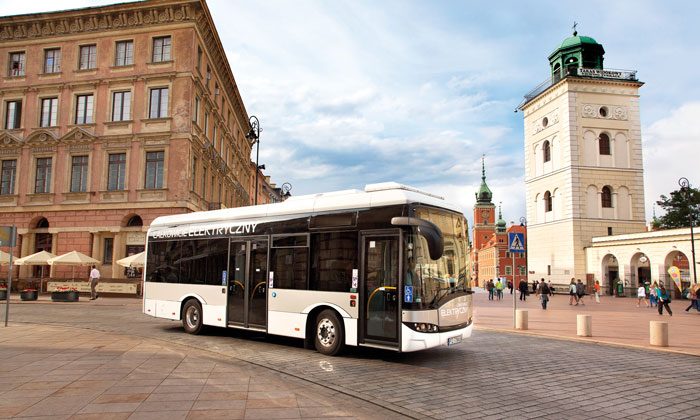 In accordance with the tender announced in April 2017, the municipality will purchase a total of 19 buses, 10 of which are battery vehicles and the remaining nine are conventional diesel buses.

The battery vehicles have been chosen for their ecological properties and lower operation costs. The order also includes the infrastructure necessary for the charging of the vehicles.

According to the contract signed on 28 September 2017, the electric Solaris buses will be delivered to Stalowa Wola in the Spring of 2018. Three pantograph charging stations which will charge the vehicles on the route and five stationary, double output depot chargers will be delivered by a Polish company – Ekoenergetyka-Polska.

Each of the vehicles ordered will be equipped with a 160kW central traction motor and electric power stored in four batteries of a total capacity of 160kWh. They will be able to be charged via a plug-in socket or with a 200kW pantograph charger.

The buses are able to be charged without the driver having to exit the vehicle, and will be equipped with passenger amenities such as USB sockets, Wi-Fi Internet and an interior CCTV system.

Stalowa Wola has also chosen to install passenger counting systems in the vehicles with counting sensors in each doors, which will allow for running statistics and more effective fleet management of their public transport.

To date, Solaris Bus & Coach has delivered electric buses to Polish customers in Cracow, Warsaw, Ostrołęka and Inowrocław. At present, the delivery of 22 battery vehicles for Jaworzno which was one of the first Polish cities to decide in 2015 on the purchase of an electric bus, is in a closing stage. Electric buses will soon leave the factory in Bolechowo and head towards Chodzież, Ostrów Wielkopolski, Sosnowiec, Warsaw, Września and Stalowa Wola.