An Rs 18.8 billion contract to design and construct the Metro Express Project in Mauritius has been signed between the government and Larsen & Toubro. 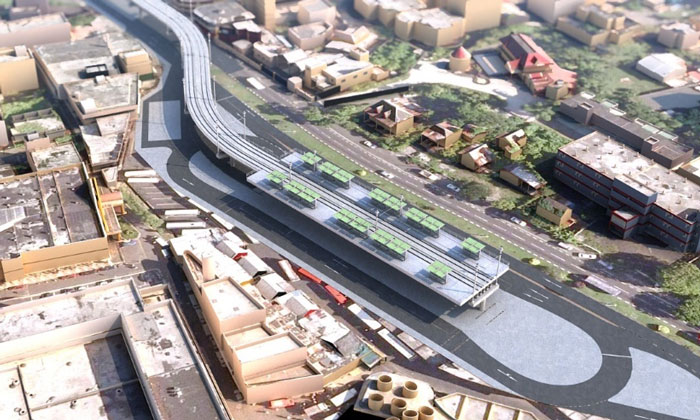 The 26km route will connect Curepipe to Port Louis and comprise 19 stations, and 6 urban terminals including four interchangers. Work is due to start in September 2017 with aims for the Port Louis Rose Hill segment to be operational by September 2019.

The alignment will connect three major bus interchanges enabling a multimodal urban transit solution. Apart from stations, the scope of the project will include the construction of viaducts and bridges, track works (with substantial ballastless tracks including plinth, embedded and grass tracks), DC electric traction systems, ticketing and passenger information systems and integration with road traffic through advanced signalling systems, procurement of rolling stock and construction of depots along with maintenance equipment.

Eighteen air-conditioned trains will be operational with an accommodation capacity of between 307 – 400 passengers with Wi-Fi facilities. The ticket fare will be aligned with that of the bus fare and the project hopes to reach 53,800 passengers by 2021.

The project will be partly funded by an Indian grant of Rs 9.9 billion and through a line of credit by the State Bank of Mauritius Infrastructure Development Company Ltd.

After the signing ceremony, Prime Minister Pravind Kumar Jugnauth expressed his keen determination to implement the project, stating that it will change the infrastructural landscape of the country and pave the way towards modernising and redefining the public transport system, while at the same improving the quality of life of the citizens.

He stated that the project will help address the traffic congestion, generate employment in the transport sector and reduce carbon emission and road accidents. Presently, traffic congestion in Mauritius is estimated to be costing the country Rs 4 billion annually.