Stagecoach in the running for top environmental award

Stagecoach Group is in the running for a top honour at the 2010 Green Business Awards. 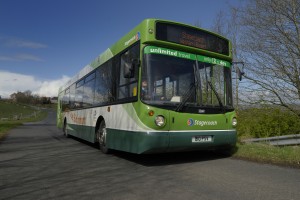 The Perth-based transport group has been named as a finalist in the Travel and Transport category at the awards ceremony to be held in London on 2 November.

Stagecoach is nominated for its innovative Bio-bus scheme in Kilmarnock, which was the first project in the UK to run a fleet of buses on 100% biofuel made from used cooking oil and other food industry by-products, all of which are from sustainable sources.

Since its launch, the Bio-bus project has reduced CO2 emissions from the vehicles by 80%, saving 2450 tonnes of carbon. Around 2million passengers have used the Bio-buses since the project was introduced and more than 70tonnes of used cooking oil has been recycled at East Ayrshire Council’s recycling plant since the start of the project – a significant increase on the volume usually recycled at the facility.

Stagecoach UK Bus Regional Director Scotland Sam Greer said: “We are delighted to be shortlisted for this high-profile award. The Bio-bus project has proved to be one of our most successful green initiatives to date and has achieved clear environmental benefits.

“We are continuing to introduce further measures to ensure we can become an even more sustainable business while also attracting more people on to our greener, smarter bus services.”

Stagecoach Group has launched a new sustainability strategy and is investing £11million in a range of measures to meet its environmental targets. The Group is targeting an overall reduction of 8% in buildings CO2 emissions and a cut of 3% in annual fleet transport CO2e emissions. It follows a reduction in the carbon intensity of its UK businesses of 5.7% in the three years to 30 April 2009.

Earlier this year, Stagecoach Group was awarded the prestigious Carbon Trust Standard after taking action on climate change by measuring and reducing its carbon emissions. Stagecoach is the first Scottish-based transport group – and one of only two listed UK public transport operators – to have achieved the stretching carbon reduction benchmark. It covers all of the Group’s bus and rail operations in the UK.

The Bio-bus scheme was launched in October 2007 and has attracted interest from across the world. The interest generated has raised awareness of the significance of waste-energy bio-fuels and the environmental benefits they offer. The Bio-bus project has also engaged the local community and encourages increased use of public transport by offering discounted bus fares to those passengers who supply used cooking oil to be recycled as part of the project.

Stagecoach recently spent £1.1million upgrading its original Bio-buses with even newer, greener vehicles and the company has also now introduced a fleet of 23 Bio-buses in Cambridgeshire.