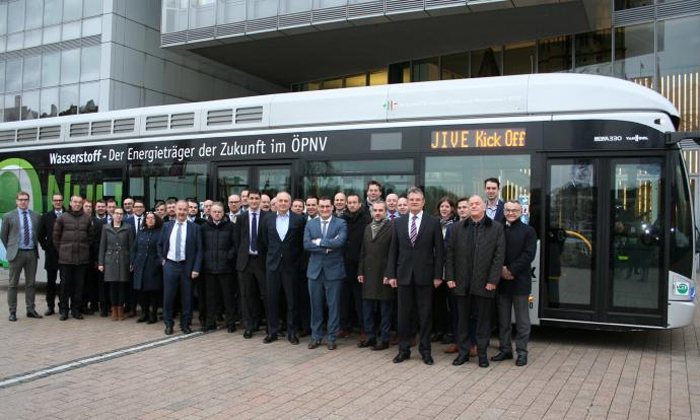 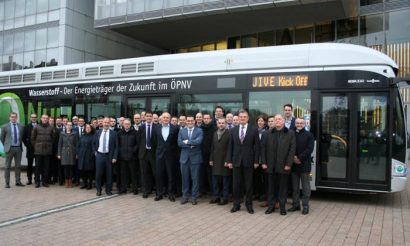 JIVE, a project focusing on sustainable and clean urban transportation in Europe, launched on the 25th January 2017 with the objective to advance the commercialisation of hydrogen fuel cell buses through large-scale deployment of vehicles and infrastructure.

The project, co-financed by the Fuel Cells and Hydrogen 2 Joint Undertaking (FCH 2 JU) under the European Union – Horizon 2020 framework programme for research and innovation, aims to deploy the largest number of full cell buses in Europe and will introduce new fleets of fuel cell buses into urban bus operations at a scale never attempted before.

Project JIVE launched in Cologne, Germany, during a joint event with EU project MERHLIN which aims to set up the infrastructure (hydrogen refuelling stations) alongside the JIVE bus deployment.

Commenting on project JIVE, FCH JU Executive Director, Bart Biebuyck, said “This project is now the 5th project related to deployment of fuel cells buses supported by the FCH JU and its launch marks a significant turning point in the decarbonisation process of public transport. The FCH JU is proud of such far-reaching project seeing the daylight which aims at unlocking the economies of scale required for commercialisation. Fuel cell buses offer great advantages as they can cut emissions and noise pollution, while providing good quality public transport. Bringing these benefits directly to citizens’ day-to-day lives is one of the priorities of the FCH JU and JIVE clearly is a stepping stone in this process.”

FCH JU believes JIVE will empower the crucial switch towards sustainable transportation and allow bus operators to work with fuel cell buses without having to require subsidiaries.

JIVE will be coordinated by Element Energy and is based on a partnership of public transport providers who will work together to procure the buses and refuelling stations from European suppliers. Buses will be deployed in the following regions and cities: Cologne, Wuppertal and Rhein Mainz in Germany, London, Birmingham and Aberdeen in the United Kingdom, South Tyrol in Italy, Riga in Latvia and Slagelse in Denmark.